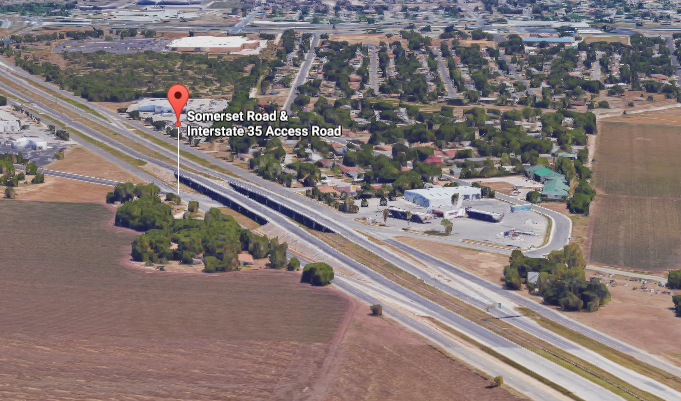 The approximate location of an 18-wheeler accident in San Antonio on Nov. 29, 2017. (Screenshot via Google Street View)
US News

18-Wheeler Ends Up on Top of Truck During Fatal Accident

One person died after an 18-wheeler flattened a tow truck on Interstate 35 in San Antonio.

.@SATXFire working to pull person out of vehicle on Interstate 35. Highway is shutdown at Somerset. pic.twitter.com/1bfwIbOhP3

Can hear lots of grinding coming from wreck where @SATXFire is working to remove victim on I-35 South. @mySA pic.twitter.com/cujIlsDqaS

A tractor trailer rests atop a vehicle on Interstate 35 South at Somerset Road in San Antonio on Wednesday, Nov. 29, 2017. One person is known dead in the accident. @ExpressNews #Texas story by @JBfromSA soon @ExpressNews @mySA pic.twitter.com/6khSiRx3wW

“My understanding is the tow truck was going slower,” Lindley said.

Regardless, the 18-wheeler crashed into a big rig towed by the truck, and rode over the tow truck, smashing the cab.

“He ran right over the top of it, couldn’t stop,” Lindley said.

The 18-wheeler was driving the 70 mph speed limit, investigators said.

The passenger in the tow truck was trapped in the wreckage and pronounced dead at the scene.

Drivers of both the 18-wheeler and the tow truck were taken to hospitals, Brooke Army Medical Center and the University Hospital. They were in stable condition, police said.

The crash “sounded like a firework,” said Jackie Cooremans, 25, who was in a nearby residence with her boyfriend.

They walked to the scene and saw that some people stopped to help free the drivers.

“The driver from the bottom (vehicle) had a head injruy,” Cooremans said. “He had a lot of blood.”

San Antonio Fire Department hazmat crews were at the scene to clean up oil that spilled on the road.

Authorities had shut down the southbound lane of I-35 during the night, but it has since been reopened.