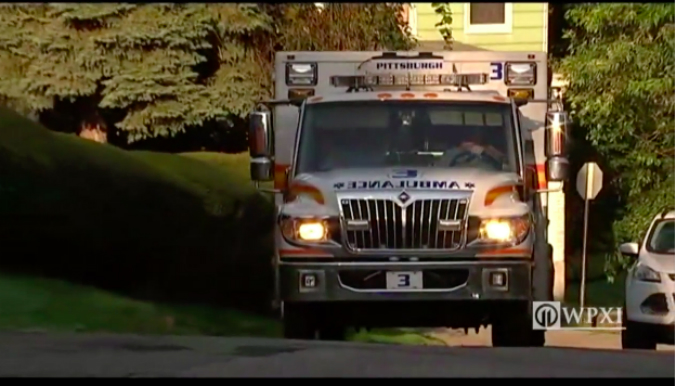 An ambulance at the scene of a raid in Pittsburgh Aug. 9, 2017. (Screenshot via WPXI.com)
Crime and Incidents

Eighteen Pittsburgh SWAT officers were taken to the hospital after being exposed to an airborne chemical during a raid in the city on Wednesday, Aug. 9.

U.S. Immigration and Customs Enforcement (ICE), Homeland Security, and Pittsburgh and Pennsylvania police were part of the raid on three homes Wednesday morning.

None of the officers of federal or state agencies were affected, the Tribune-Review reported, and the 18 who were affected were medically cleared.

The 18 SWAT officers experienced dizziness and numbness, symptoms that led Pittsburgh public safety spokeswoman Margaret Philbin to believe the chemical they were exposed to was fentanyl, the Tribune-Review reported.

Fentanyl is a powerful synthetic opioid that is sold in prescription painkiller products. It is also commonly available on the black market and is often added to street drugs to increase their potency and cut costs.

Because of fentanyl’s potency—50 times that of heroin—it is a dangerous substance to come into contact with. A speck the size of a few grains of salt can kill a 250-pound man, can be absorbed through the skin, and can even become airborne, making it a serious potential public hazard. Another, more potent derivative of fentanyl has been labeled a chemical weapon. Much of it is produced in China, where it is not a controlled substance, and enters the United States across the southern border.

Jeanine Buchanich, an epidemiologist at Pittsburgh’s Graduate School of Public Health told Philly.com that for the first time, fentanyl surpassed heroin last year in drug overdose deaths in Pennsylvania’s Allegheny County, which encompasses Pittsburgh. Two-thirds of those who overdosed in 2016 had fentanyl in their system, while half had heroin—some had both, she said.

The SWAT officers were assisting the federal agencies in serving search warrants and making arrests at three separate locations in Elliott, about two miles from downtown Pittsburgh on the city’s west end.

A spokeswoman for the U.S. Attorney’s office could not confirm the number of people arrested, but said charges would be filed later Wednesday in the U.S. District Court for Pittsburgh, according to the Tribune-Review.