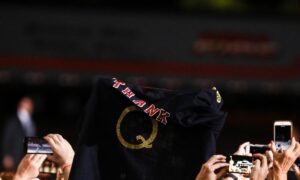 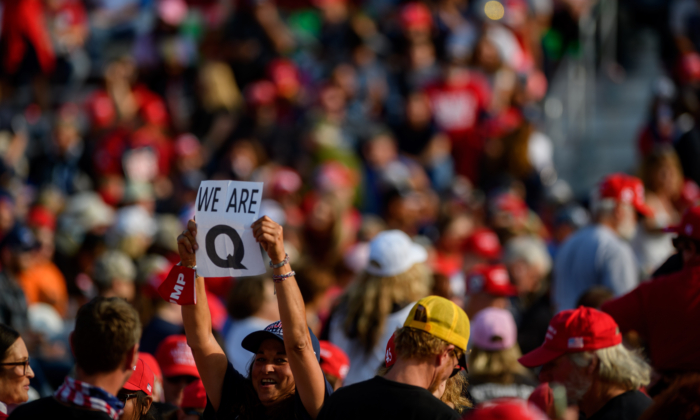 A woman holds up a QAnon sign to the media as attendees wait for President Donald Trump to speak at a campaign rally at Atlantic Aviation in Moon Township, Penn., on Sept. 22, 2020. (Jeff Swensen/Getty Images)
Politics

Seventeen congressmen on Friday voted against a House resolution condemning QAnon, an anonymous online persona which is believed, at least in part, by more than half of Republicans in the United States, according to one poll.

The tally excludes Rep. Buddy Carter (R-Ga.) who voted against the resolution during roll call but later said he voted in error.

All of the Democrats and 146 Republicans voted in favor of the resolution, which describes QAnon as “a collection of unfounded conspiracy theories that have spread widely on the internet since 2017.”

Rep. Justin Amash (I-Mich.)—the lone independent in the House who quit the Republican party in 2019—also voted against the resolution.

“The resolution threatens protected speech (absurd as that speech may be), and its prescriptions for addressing QAnon aren’t appropriate for what we know about them & may make things worse. These are conspiracy theorists who believe in a deep state that’s fighting against them, so Congress’s declaring that the intelligence community and FBI should be sent after them just confirms their fears,” Amash wrote on Twitter.

“There is a world of difference between conspiracy and criminal—one is protected by the First Amendment; the other should be condemned in all forms. It’s a swampy strategy to call out a fringe right-wing group with no mention of ANTIFA and other radical Leftist groups after over one hundred days of unmitigated mob violence in cities across America,” Arrington said in a statement about the vote emailed to The Epoch Times.

“Instead of political stunts, Democrat leadership should be working on bipartisan legislation to provide relief to working families and small businesses in a time of unprecedented crisis.”

Norman said that while he condemns QAnon, he voted against the resolution because it failed to name “other violent organizations.”

“This resolution was yet another worthless messaging bill that does absolutely nothing to address the violence taking place in cities throughout our nation,” Norman said in a statement. “For Congress to pass a resolution condemning QAnon by name, but make no such mention of other violent organizations, is shameful.”

The text of the resolution did condemn “all other groups and ideologies, from the far left to the far right, that contribute to the spread of unfounded conspiracy theories and that encourage Americans to destroy public and private property and attack law enforcement officers.”

Tiffany, without naming QAnon, said in a statement that he has “condemned, and continue to condemn, anyone who engages in rioting, looting, or violence of any kind, regardless of their political views.”

Carter said he voted against the resolution by mistake.

“I have made my position on QAnon very clear. This was an honest mistake and an unintentional vote on a non-binding resolution while I was distracted advocating for additional relief for small businesses and working families. I have already submitted a clarification, and my intended ‘aye’ vote will be reflected in the record,” Carter said in a statement.

A spokesman for Ferguson said the congressman “is not a supporter of QAnon.”

“He in no way intended to lend credibility to conspiracy theorists or their outlandish ideas. He does, however, support the First Amendment and its protection of free speech,” Brian Piper wrote in an email to The Epoch Times.

Gosar, in an emailed statement, said, “ANTIFA and BLM have coordinated a patterned commission of crimes all summer and Democrats refuse to disavow the violence, or support law and order. The Russia hoax and ‘systemic racism’ are real conspiracy theories. ‘Racism’ hoaxes have led to burning cities and murdered cops.”

In a statement emailed to The Epoch Times on the day after the vote, Davidson said the resolution “amounts to Congress policing speech.”

“Yesterday’s resolution condemning QAnon and various other conspiracy theories was beneath the dignity of the House of Representatives. We have more important matters to attend to.” Davidson said. “The resolution itself amounts to Congress policing speech instead of taking care of the issues that are of utmost importance to Americans, namely getting the economy fully open and ensuring our elections are secure.”

The resolution condemns QAnon for, among other things, embracing popular conspiracy theories.

“QAnon initially alleged that prominent Americans are engaged in a secret plot to control the world, while using their power to exploit children, and has expanded to embrace virtually every popular conspiracy theory of the last several decades, from questioning the truth about the September 11th terrorist attacks, to believing in alien landings, to denying the safety of vaccines,” the resolution states.

The QAnon persona surfaced on the anonymous 4Chan message board in 2017 and has since migrated to another forum. The persona uses a number of methods to establish his or her credibility, including posting photographs which purport to have been taken aboard Air Force One and at the White House.

QAnon usually posts questions and cryptic messages, encouraging the readers to answer and interpret them through their own research. The persona has also suggested some of the posted information is intentionally false or misleading in order to trick opponents.

Nearly half of Americans were aware of QAnon as of early September this year, according to a Pew Research Center poll. Nearly three in four survey takers said QAnon is either “very bad” or “somewhat bad” for the country.

Establishment media outlets have repeatedly and prominently excoriated the theories promoted by QAnon, calling them baseless conspiracies. Among the theories is a proposition there exists a satanic pedophile ring.

The number of Americans who are aware of QAnon has more than doubled to 47 percent since earlier this year, when 23 percent said they’ve heard about it.

President Donald Trump has said he doesn’t know much about the movement but appreciated that the people involved “like me very much.”

When a reporter asked if the president believes in a QAnon theory that he is saving the world from satanic pedophiles, Trump asked, “But is that supposed to be a bad thing or a good thing?

About four in ten (41 percent) Republicans believe QAnon is a good thing for the country, compared to just 7 percent of Democrats, according to the Pew poll.

At least one QAnon sympathizer will likely serve in the next Congress. Georgia Republican Marjorie Taylor Greene won the Republican primary and is expected to win the general election in November. Trump endorsed her in the race.