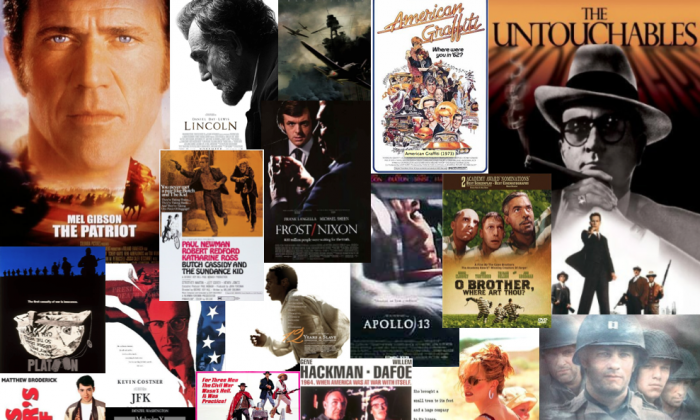 18 Movies That Will Make You Appreciate American History

Based on the true story of Solomon Northup and his fight for survival and freedom. In pre-Civil War United States, Northup grew up a free black man in upstate New York. He then gets abducted and sold South into slavery where he experiences both cruelty and unexpected kindness as he tries to stay alive and keep his dignity. After 12 years of suffering, he encounters a Canadian abolitionist who changes his life forever.

Steven Spielberg’s Oscar winning masterpiece tells the story of one of the most iconic U.S. president’s of all time—Abraham Lincoln—and his pursuit of abolishing slavery. Set during the Civil War Lincoln shows courage and leadership among the men in his cabinet as well as on the front lines.

The story of a farmer, Benjamin Martin, who is driven to lead the Colonial Militia during the American Revolution after a British officer murders his son. Set in 1776 colonial South Carolina, the farmer faces difficult choices as his two other sons join a rebellion against England. But after the Colonel of a British troop burns his plantation, Martin will have to decide whether to avenge his son or join a rebellion to become part of the new ambitious nation.

This drama, set during the Great Depression, is all about American folk music, chain gangs, treasure, robbery, and other American pastimes. Written and produced by Joel and Ethan Coen, the film stars George Clooney, Holly Hunter, Charles Durning, John Turturro, and John Goodman.

The story of the legendary battle between former president Richard Nixon and television personality David Frost. During the three years after being forced from office, Nixon remained silent but in 1977 he agreed to an interview with Frost about the Watergate scandal, which ended his presidency. The result was an interesting, hours-long battle of wits.

Set during the invasion of Normandy on June 6, 1944, members of the 2nd Ranger Battalion fight ashore to secure a beachhead when two brothers are killed in action while their third brother is killed elsewhere. As their mother is about to receive all three telegrams in one day, the United States Army Chief of Staff learns that their fourth brother, Private James Ryan, is still alive.

This film is based on the true story of the ill-fated 13th Apollo mission that was bound for the moon in 1970. Three astronauts were scheduled to fly Apollo 14, but were then unexpectedly moved up to flight 13. As America looks beyond the routine flight, things start to get out of hand, and a safe return home seems unlikely.

On November 22, 1963, president John F. Kennedy is assassinated while Lee Harvey Oswald is arrested for the crime and then shot by Jack Ruby, who was avenging the president’s death. The investigation that followed found Oswald and Ruby acted alone in their respective crimes, making the Louisiana district attorney suspicious. The attorney then conducts his own investigation which gets backlash from government officials and political figures.

This biographical epic of activist Malcolm Little known better as Malcolm X, the legendary African-American leader, takes viewers from the era of Pullman porters and Harlem jazz towards the end of the Vietnam War. The film, directed by Spike Lee, spans Malcolm X’s life and career until his assassination on February 21, 1965.

The story of a young Native American who gives up college to volunteer for combat in Vietnam. As he arrives and Vietnam and begins to realize the situation and his own insignificance, he falls into psychological meltdown and struggles to survive. After making friends in the platoon he soon finds himself at odds with the enemy inside and outside his unit.

Two very different FBI agents arrive in Mississippi to investigate the murder of civil rights workers during the ’60s. As they try to break the silence in a town where segregation divides black and white, they soon find themselves at odds with other authorities in town.

Federal agent Elliot Ness sets up to stop Chicago’s most dangerous crime boss Al Capone. He assembles a personal team of mob fighters to go after Capone using unconventional means during the mob wars of the 1920s. The fictionalized account results in the arrest of Capone but not without mass shootouts and tragic events.

This film, based on a true story of the unemployed single mother, Erin Brockovich, who accidentally lands a job at a lawyer’s office and starts investigating a real estate case involving a multi billion-dollar company. She soon discovers that the company is sneakily buying land contaminated by a deadly toxic waste that the company illegally dumped, which was poisoning residents in the area. The case ends up being one of the biggest class action lawsuits in American history.

This classic Western film features a bounty hunting scam that brings together the most unlikely trio, a professional gunslinger, a hit man, and a wanted outlaw who try to find gold buried in a remote cemetery.

This classic American pop culture film tells the story of high school student Ferris Bueller and how he develops an intricately sophisticated plan to skip a day of school. While talking his friend into borrowing his dad’s Ferrari and riding around town with girlfriend Sloane, the two have no idea what awaits them at home.

Two boys who just graduated high school and are scheduled to leave for college in the morning enjoy one last night together with friends cruising the strip, looking for adventures, and making impulsive decisions. It’s a quintessential look at one of the most important American rites of passage.

Two buddies, Butch and Sundance, are the leaders of the Hole-in-the-Wall Gang, who get involved in robbing trains once too often, and then find themselves the targets of a dangerous posse. Although they think they finally escaped, their luck gets tested as they travel abroad.