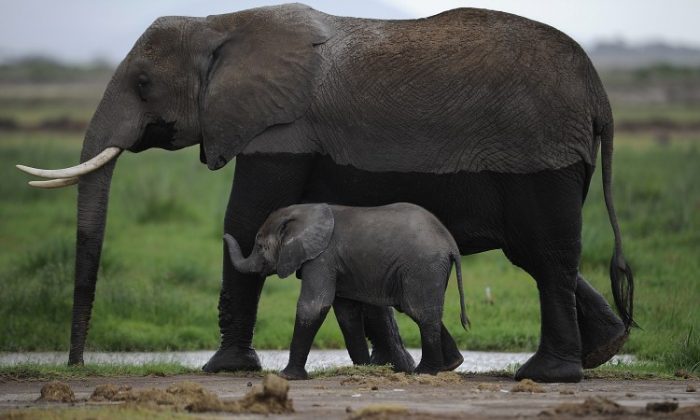 Elephants in a file photo. (Philippe Lopez/AFP/Getty Images)
US

18 Elephants Put on Plane From Africa, Headed to US Zoos

Eighteen elephants are coming to the United States from Africa after a U.S. judge approved their importation over the protests of animal rights groups.

The group Friends of Animals had tried to block the elephants importation.

We’re not going to be able to keep the animals from coming to these zoos, that’s for sure.
— Michael Harris, Friends of Animals

Michael Harris, the Wildlife Law Program Director at Friends of Animals, said in a statement that their lawsuit claimed that the U.S. Fish and Wildlife Service “had a mandatory duty under the National Environmental Policy Act to fully evaluate and disclose whether the elephants, as a result of captivity, would suffer social, psychological, behavioral, and physical impacts for the rest of their lives.”

But a judge ruled against the lawsuit, allowing the elephants to come to America from Swaziland in Africa.

U.S. District Judge John D. Bates had temporarily frozen the import while he deliberated, but decided to ultimately allow it for fear that sedating the elephants any longer would cause harm.

“It is in (the elephants’) best interest to relocate them as soon as possible,” the zoos’ said in a joint statement. “Swaziland is in a state of national disaster due to severe, historic drought that has killed tens of thousands of animals. Food throughout the region is scarce. The elephants would have been killed if not relocated.”

Dennis Pate, president/CEO of Omaha’s Henry Doorly Zoo, told KEYE-TV in a previous interview that “they were planning on culling them.” At the Omaha Zoo, the elephants will be part of the new African Grasslands.

Bates said the court was “not able to definitively resolve the issue” because of what happened, reported the Omaha World Herald.

The zoos had placed the elephants in sedation and were ready to bring them into the country on permits issued by the U.S. Fish and Wildlife Service, despite the pending lawsuit against them filed by Friends of Animals.

“We’re not going to be able to keep the animals from coming to these zoos, that’s for sure,” Harris of the group said.