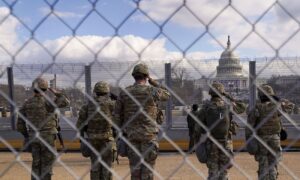 The disbanding of the Trump administration’s 1776 Commission, and the removal of its report from the White House website by President Joe Biden, is the result of an incompatibility between the United States’  founding principles and some of the policies that the new administration is attempting to empower or instill, such as identity politics and critical race theory, according to Matthew Spalding, the commission’s executive director.

“You could abolish the commission, but you can’t erase history, you can’t get rid of these principles. That’s what we’re dedicated to,” said Spalding, who is a professor of constitutional government and dean of the Van Andel Graduate School of Government at Hillsdale College. “And that’s what we will continue teaching and working to defend.”

He believes the Biden administration’s action gave the report, which is available on other forums, more prominence.

“I think by abolishing the commission and removing the report, they actually drew more attention to it. Thank you very much,” he said during an interview with The Epoch Times’ “American Thought Leaders.”

Formed last September by executive order by then-President Donald Trump, the 1776 Commission was commonly seen as a direct response to The New York Times’ 1619 Project, which portrays the United States as an inherently racist nation. The NY Times’ Pulitzer Prize-winning project consists of a collection of essays that argue, among many other controversial claims, that the primary reason for the American Revolution was to preserve slavery.

Spalding notes that current popular educational trends are unfair to students because they don’t give a true picture of the founding of America. The Declaration of Independence and the Constitution are regarded as “dusty old documents” rather than honored documents that hold in them powerful truths that led to the founding of a nation based on the assertion that all men are created equal and are endowed by their creator with unalienable rights, he says.

He asserts that while America hasn’t always lived up to the principles that the founders believed in, the nation shouldn’t be judged only on the basis of its deficiencies.

One of the most obvious deficiencies relates to the subject of slavery.

When questioned about the irony of the fact that some of the founders owned slaves while at the same talking about abolishing slavery, Spalding acknowledged the legitimacy of the criticism; he noted that it’s important to see how overcoming slavery and the realization of these flaws are part of history. It shouldn’t invalidate the greatness and nobility of the founding principles, which should still be loved and inspire patriotism, he says.

“Slavery clearly existed. They were arguing about it at the time,” he said. “Jefferson held slaves at the same time he wrote a condemnation of the slave trade in the draft of the Declaration of Independence. George Washington owned slaves. But by the time he writes his final will, he frees them—those that are in his estate—because he has come to detest slavery.”

He stated further that slavery didn’t grow out of the founding itself.

“The principle [of equality and freedom] had been established. … They made compromises, but we have to understand that they were compromises, compromises in light of the Declaration of Independence. That’s the only way to understand it. Because otherwise, you must condemn the whole thing. And I think that’s just not good history,” he said. “And that’s not fair to them.”

Spalding says one must understand something in order to love it, and in contrast to other regimes, the love is not to be imposed on the people.

“You can love this country, despite its flaws, because it has done so much to advance that cause,” he said. “That’s what makes it a great and wonderful, successful nation.”

On the subject of education, Spalding notes that some important topics aren’t taught properly anymore, such as civics.

“What is a genuine education? And what the report is especially concerned about is what is an education about civics? What does one need to know to be a good citizen?” he said.

“In America, to be a citizen means you actually need to know something about American history, how American government works, the debates over what the declaration means, alternatives, great figures in history, those kinds of things. And that’s not the way civics is taught much anymore. And we think a recovery of that would be a large step in the right direction.”

Spalding suggests that progressives ironically over-empower government and interpret “truth” rather than giving people the capability to govern themselves.

“The intellectual point they make is that ‘the idea that there are truths isn’t true. They’re only historical truths or truths that progress with time,'” he said.

“Instead, what they turn to, at least the early progressives turned to science, expertise, or the idea of bureaucrats, people that have been specially trained to run things, whether that’s in the economy, in the academy, or in government. And this is how they reshaped and rethought government to that they have themselves into this administrative state.

“It’s no longer about the fundamental ends of government. It’s about the process. And so yes, they very much introduced in its place, in the place of a Constitution granted on the principles as understood by the founders. Having unmoored it from the principles, they … reinvented this new way of thinking about how to run things.

“And I think that’s something that has stuck in American history in politics, and we continue to have a kind of a troublesome problem in our politics is the fights over bureaucracy, the so-called fourth branch of government.”

Spalding asserts that religious liberty is a “core right” that’s intrinsically related to civil liberty, and that securing rights should “garner the most respect and protection” over the increasing dominance of government.

When asked about the future of the 1776 Commission, he said, “The commission, in some form, will carry on.”