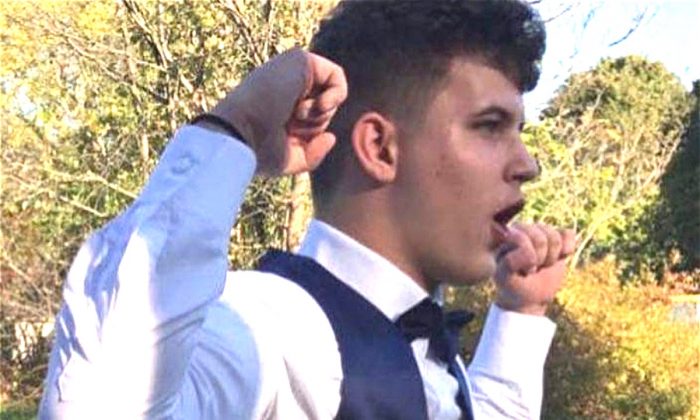 A 17-year-old working as a pizza delivery boy was shot dead by his girlfriend’s father on July 19. The girl’s father suspected the teens were using drugs.

“The dad suspected they were using drugs, I believe, with a group of friends and then he stated he came up here to talk to him,” said New Castle Police Chief Robert Salem, according to CBS Local.

Michael J. Dbiagio, 41 allegedly killed Darren Scott Jevcak in the parking lot of a business located at 1101 Highland Avenue, said the New Castle Police Department in a release on its Facebook.

The police said when they arrived at the scene, the suspect was still present at the crime scene with the firearm.

“Dbiagio was arrested and did admit to getting his firearm and driving up to New Castle from Beaver Falls and shooting the victim when the victim walked out of his place of employment,” the police said in the statement.

The suspect is being charged with criminal homicide and aggravated assault.

“He didn’t talk to him, he starting shooting as soon as he came out of the place of employment,” Chief Salem told CBS Local.

Salem told the media that Jevcak was a good child and did not deserve such an end. “He was actually working two different jobs,” he said. “By all accounts, he was a good kid, we don’t have any record of him in our records for any negative incidents.”

Jevcak’s mother took to Facebook to express her shock and sorrow at her son’s untimely death.

“I cannot even put my thoughts/emotions into words right now. My son did not deserve this. All he did was love a girl who had a psychotic father. This man plotted to ambush my child at his job and kill him,” wrote Ashley Altemus.

Jevcak had turned 17-years-old on July 5, and Altemus had shared two pictures of him—one as a baby and one as a young man and had said that she was proud of him.

The same joy turned into immense sorrow for the mother who describes herself as “single” on Facebook.

“I’ll never get to hug my baby again. Never hear his voice. His older sisters are heartbroken. I had to sit my three young children down this evening and tell them their brother is gone. They are destroyed, as am I, and anyone else who was lucky enough to know my boy,” wrote Altemus.

The grieving mother said her son’s organs will be donated. “This was my son. Always had a desire to help others. He will live on,” she wrote.

Jevcak’s uncle wrote on Facebook that he was the first nephew and the first grandchild of the family.

“We are heartbroken, and I really can’t even wrap my head around this yet. Gone way too young and so senseless,” wrote Josh Altemus Western PA.

The uncle said the teen died in the “name of love.”

“A good kid gunned down while working and trying to be a productive member of society. He died in the name of love. Following his heart. Which was huge,” he wrote.

Jevcak’s workplace also left condolences for his family on social media. “We lost our Darren, and we are stunned and horrified by this event. Rest In Peace Darren,” said Scustie’s Super Pizza.

retweet, share, anything helps. the loss of a family member is NEVER easy and any donation will help darren’s family. 🙏🏼https://t.co/z2z3MjkwLt

A GoFundMe campaign has collected over $4,000 for Jevcak’s funeral. “Help raise funds for this family who lost their 17-year-old family member to an awful act of crime. Your support will go far for arrangements they need,” said the fundraising appeal that is written on behalf of Altemus.