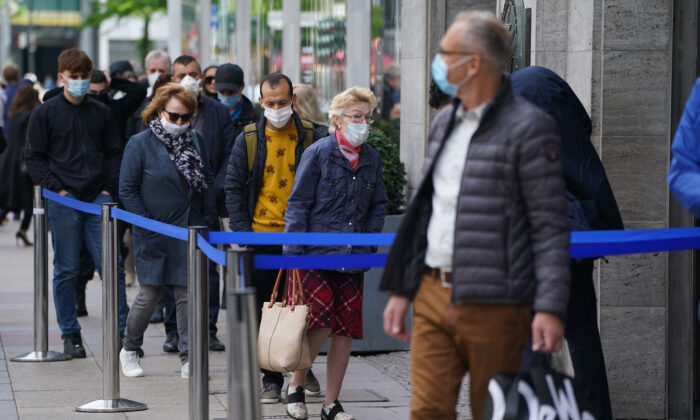 Authorities in Germany said six people beat and hospitalized a 17-year-old girl who apparently refused to wear a face mask on a train in Berlin.

The girl told police that a dispute escalated after she said she wouldn’t wear a mask in the district of Prenzlauer Berg, officials told Die Welt. The unidentified girl was traveling with her friends and was told that it was a legal requirement to wear the mask, officials told the paper.

Police said that once the girl left the train, three men and three women attacked, punched, and kicked her, and tore out some of her hair. She was later hospitalized as a result of her injuries, officials said.

Authorities told Die Welt that several of the men were drunk. They also found drugs on one of the suspects.

Investigations into the three women who were allegedly involved in the attack are underway, police said.

Other details about the incident, including the names of the male suspects, weren’t provided.

Germany’s COVID-19 restrictions include a mandate that travelers have to “wear a medical or FFP [filtering face piece] mask” on public transportation. They also have to have a COVID-19 vaccine passport or must show proof they’ve recovered from the CCP (Chinese Communist Party) virus, according to German health officials.

The U.S. Centers for Disease Control and Prevention also requires travelers on public transportation such as trains, planes, and buses, to wear masks. Despite COVID-19 cases plunging in nearly every state, it isn’t clear when officials will decide to relax such restrictions.

German lawmakers are currently pushing a bill to make vaccination against COVID-19 mandatory, which has faced resistance from politicians as well as ordinary Germans. Nearby Austria recently passed a law that requires everyone who is eligible aged 18 and older to receive the vaccine or face heavy fines.

However, on Feb. 7, the German state of Bavaria announced that it wouldn’t enforce a CCP virus vaccine mandate for nursing staff in hospitals or care homes starting in mid-March, according to the state’s premier, Markus Soder.

“The vaccine mandate for [health care] institutions that was to come from March 15 is no longer an effective means to accompany, curb or stop the current Omicron wave,” Soder said. “It only leads to problems; it is unfortunately no solution.”