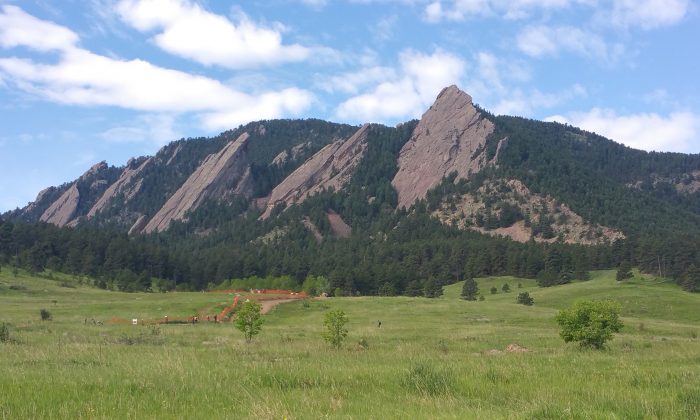 The Flatirons in Chautauqua Park in Boulder, Colorado on June 2, 2017. ("The Flatirons are calling" by James Tiffin Jr./Flickr [CC BY-SA 2.0*])
Crime and Incidents

A 17-year-old boy from Minnesota plunged to his death on Sunday, Aug. 6, shortly after snapping a selfie atop Flatiron One in Boulder, Colorado.

The Boulder County Sheriff’s Office said the boy, Carter Christiansen, took the selfie around 6 p.m., shortly before some hikers called 911 to report his fall.

Sheriff’s Cmdr. Mike Wagner estimates that he fell over 100 feet while climbing the large, flat rock face and apparently without gear. The Sheriff’s Office said that all he had was some camping and survival gear, but nothing that would help him rock climb.

Some hikers heard Christiansen fall and tried to revive him while calling 911, but by the time first responders came, he had no pulse and was not breathing. He was declared dead at the scene.

The Boulder County Coroner’s Office is doing an autopsy to determine the exact cause of death.

In the days after his fall, the Sheriff’s Office learned that Christiansen was a resident of Maple Grove, Minnesota, about 10 miles northwest of Minneapolis, but had spent his teenage years in Longmont, about 15 miles northeast of Boulder, and was visiting some friends there at the time of his fall.

The Boulder newspaper the Daily Camera reported that his friend Michael Kelly hadn’t heard from Christiansen all day and became worried, going to Chautauqua, the park around the Flatirons, to look for him.

When he pulled up, another friend who had also been looking for Christiansen told him what had happened.

“I couldn’t believe it,” Kelly told the Daily Camera. “The first thing I thought of was that picture. I just pulled it up on my phone and I just looked at it.”

The family said in a statement that Christensen had aspirations of becoming a Navy SEAL and had come to Colorado to be with friends while he trained for Navy SEAL enrollment.

“Carter was a lover of the outdoors and an adventurous spirit and was experiencing joy in summiting the First Flatiron in Chautauqua Park,” the family said in its statement. “Carter will be loved and missed by all of his family and friends.”

The Flatirons are a popular destination for rock climbers and have a long history in the rock climbing world: in 1906, Flatiron Three became the first recorded rock climb in Colorado, reported Climbing Magazine.

While there are roughly 10,000 climbers on the Flatirons each year, the Daily Camera reports that this is the first climbing fatality in the park in nine years. Last February, a man was found dead near Flatiron Three but authorities determined it was a suicide and not an accident.