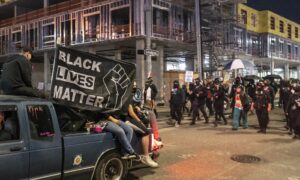 A teen was accidentally killed by Los Angeles police officers as he was trying to prevent a pit bull attack in Palmdale, Calif.

The teen was struck by a “skip” round—meaning a bullet that ricocheted off a hard surface—after the officers opened fire, Capt. Christopher Bergner of the Sheriff’s Department Homicide Bureau told the Los Angeles Times.

The boy, Armando Garcia, 17, apparently tried to jump on the dog to prevent the aggressive dog from attacking police. A deputy was bitten by the animal and was also struck by a bullet fragment, LA Times reported

“He may have been struck by one of the skip rounds in what we’re calling an extremely, extremely unfortunate incident,” Bergner said. “Our initial impression was [the deputies] didn’t even see the individual coming around from the side of the building.”

Officials responded to a noise disturbance at around 3:40 a.m. after someone complained about a loud party. When they arrived, Garcia’s dog attacked them and bit one of the deputies on the knee.

Garcia was able to tie up the dog but it broke free and attacked again. The deputies were forced to open fire on it.

“As the deputies approached the driveway … one of the deputies was attacked by a 60- to 65-pound male adult pit bull,” Bergner told the Los Angeles Daily News. “The deputy was bit on his left knee, and at that time a male Hispanic juvenile came from behind the apartment complex where the carports are and at this time we believe he restrained the dog and took him to the rear of the complex.”

“As they were waiting for medical treatment to arrive, the pit bull came from the rear carport area location, and again charged deputies,” Bergner said. “At that point, two deputies engaged the dog in gunfire … (and) the dog quickly retreated, back to the rear of the complex into the carport area.”

The two deputies shot at the pit bull “while the dog owner simultaneously tried to jump onto the dog to stop it from attacking deputy personnel,” an internal memo said.