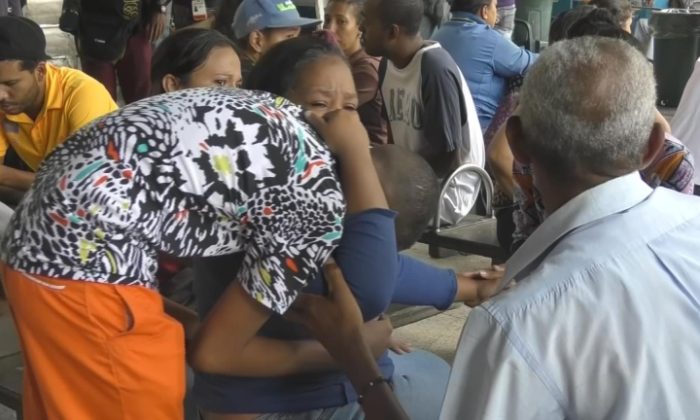 At least 17 people were killed in a brawl and stampede at a nightclub in Venezuela on June 16, 2018. (Reuters/Screenshot)
Americas

17 Killed in Nightclub Brawl in Venezuela

At least 17 people were killed in a brawl and stampede at a nightclub in Venezuela, according to reports.

A tear gas canister went off during a brawl in the crowded nightclub in Caracas, the capital, on Saturday, CBS News reported. Interior Minister Nestor Reverol said the incident at the “Los Cotorros” left 17 people dead and several injured.

“The establishment has been ordered closed, and we are investigating in coordination with the public ministry, which is directing the criminal investigation,” he said.

Seven people were arrested in the incident, including the person who is believed to have set off the tear gas canister.

According to Telesur, at least 500 people were inside the club when the fight broke out.

“The government of the Bolivarian Republic of Venezuela, led by President Nicolas Maduro, deplores this regrettable incident a from our government we extend words of condolence for the families of the victims, and also the respective guidelines for parents and representatives to establish control measures on minors, as established by Venezuelan laws,” Reverol added, reported Telesur.

Julio Cesar Perdomo, a family member of a victim, told Sky News that the tear gas emitted from one of the bathrooms, prompting people to try and leave. “The kids couldn’t leave,” Perdomo said.

Local councilor, Jesus Armas, said that the interior ministry needs to explain how a civilian got ahold of a tear gas canister, which only police and security forces should have. Meanwhile, officials need to investigate whether the club had permission to house hundreds of people there.

“That’s not a big space and that should not be authorized,” he said.