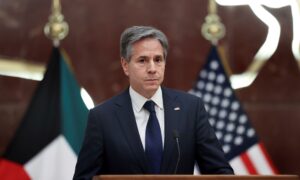 A Qantas flight from Perth to London turned around two hours after takeoff due to a disruptive passenger.

The Boeing 787-9 Dreamliner took off from Perth and was slated to land in London after a 17-hour flight. According to passengers, the person locked himself in the bathroom for an hour.

“He locked himself in the loo for about an hour,” Clare Hudson said, the ABC reported. “Then when he came out, first of all we heard some shouting, we were about three or four rows in front of where it happened.”

A disruptive @Qantas passenger who forced a flight from Perth to London to turn back has been slapped with an interim no-fly ban and could face a hefty compensation bill. https://t.co/EaZDnAmIKO #7News pic.twitter.com/PFqAu0VNhF

She added: “Then he was squaring off against another passenger and sort of shouting in his face. It looked like it was going to turn into a brawl. Eventually they managed to calm him down and get him back in his seat. He seemed really wired and agitated.”

Reports said that the passenger was handcuffed, masked, and removed by police.

“One of the cabin crew, one of the ladies, I think was a bit upset. But for us, luckily, we were far enough away that we didn’t feel threatened. I think some of the passengers probably would have been quite scared,” Hudson said.

Christine Kohli told the ABC: “They did ask for some assistance from some male passengers, and some passengers went and helped him. I understand he was restrained down the back of the plane.”

“I think it was scary for quite a few people, one of the passengers I was with became quite agitated and quite upset, but I think the air crew were marvelous, they were very in control of the situation, they were calming passengers,” she said. “They were very, very supportive. They got him down to the back of the plane quite quickly. It was clear he was quite an unwell man.”

Last week, an Emirates Airlines plane was quarantined at the John F. Kennedy International Airport in New York City after it was reported that numerous passengers were sick. Erin Sykes posted a video on Twitter (which can be seen at the top of the article) of an official telling passengers to keep out of the plane’s aisles while telling them “no baggage in the aisles.”

The U.S. Centers for Disease Control and Prevention (CDC) said around 100 passengers were believed to be sick, The New York Times reported, but only about 19 were considered ill. Eleven people were hospitalized, and they had the flu or common cold, the agency said.

American Airlines flights 755 and 1317, which respectively landed in Philadelphia and Paris, had 12 passengers on both with flu-like symptoms. The 250 total passengers were held for medical review.

“Nobody was very ill, everybody was allowed to go on their way,” said Dr. Marty Cetron, with the CDC, told The Times.

The passengers were likely sick because they did the annual pilgrimage to Mecca, Saudi Arabia. “Everywhere you have millions of people congregate, the disease transmission goes up,” said T.J. Doyle, the medical director at Stat MedEvac, told the paper.