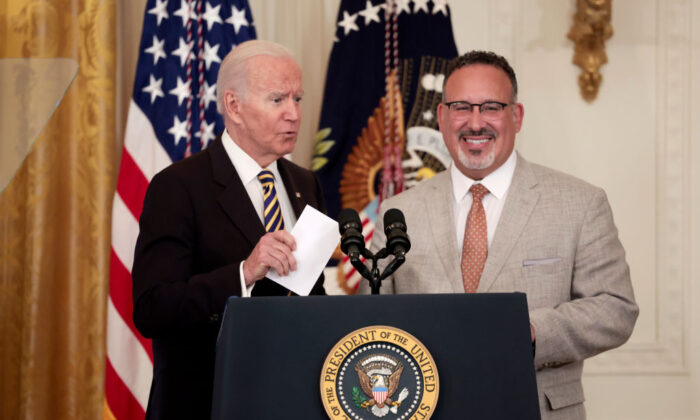 President Joe Biden (L) and Education Secretary Miguel Cardona deliver remarks during an event for the 2022 National and State Teachers of the Year at the White House on Apr. 27, 2022. (Anna Moneymaker/Getty Images)
US

A Biden administration proposed rewrite of the landmark Title IX ban on discrimination in public school classrooms and athletic fields will repeal five decades of women’s progress in education and subject female athletes to physical injury and sexual assault, according to a coalition of 17 Republican state attorneys general.

In a withering 37-page critique of the Department of Education’s proposal to replace the biological definition of sex with “gender identity,” the attorneys general, led by Montana’s Austin Knudsen, submitted their comment letter in the final hours of a lengthy public comment period that ended Sept. 12 at midnight.

The total comment count will be made public by the government when the published version of the proposal in the Federal Register is updated.

While the state attorneys general addressed every major component of the proposal, a primary focus of their analyses was the projected impact of the federal statute’s revision on women in schools and athletics, both adults and students.

“The department’s proposed rule defeats the entire original purpose of Title IX and will have a devastating impact on women’s athletics. Since its enactment in 1972, Title IX has led to an important increase in athletic opportunity for girls and women in sports,” the attorneys general wrote.

“In the name of equity, the proposed rule travels backward to a pre-Title IX era when schools had no obligation to provide equal, safe, and fair athletic opportunities for women and girls.

“It mandates open access to every education program and activity based on the amorphous concept of ‘gender identity.’

“So now, any school, college, or university that separates athletic teams based solely on biological sex will be actively committing a federal civil rights violation.”

“Biological differences between males and females mean that girls and women are at an enormous disadvantage when competing against biological men in many sports.

“This also puts women and girls at greater risk of injury when competing against biological males in contact and combat sports.”

In a statement issued by Knudsen’s office, it was noted that when Title IX became law in 1972, it led to “an explosion in the participation of girls and women in sports” in secondary and post-secondary education.

“This wolf comes as wolf: Defining the term ‘sex’ to include gender identity will destroy women’s sports.”

As a result, the 17 Republican state attorneys general concluded by noting that “because the Biden administration’s attempt to change the focus and meaning of Title IX is an attack on the rights of girls and women and will make them less safe and cause them to lose vital opportunities, we will fight your proposed changes to Title IX with every available tool in our arsenal.”

As reported by The Epoch Times, a similarly lengthy and detailed critique was submitted a day earlier by the Arizona-based public interest law firm, the Alliance Defending Freedom (ADF) that specializes in First Amendment cases concerning freedom of speech and of religious expression and practice.