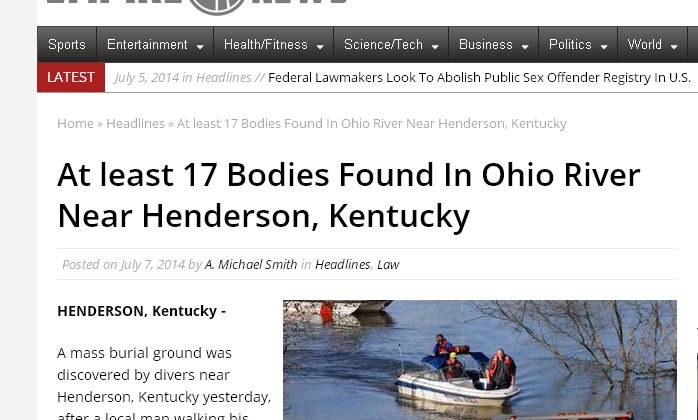 An article saying “at least 17 bodies” were discovered in the Ohio River near Henderson, Kentucky, is nothing more than a fake news story. (Screenshot/Empire News)
Social Media

An article saying “at least 17 bodies” were discovered in the Ohio River near Henderson, Kentucky, is nothing more than a fake news story.

The bogus report was posted on Empire News, a self-proclaimed “satire” website. The website has published other fake stories including one saying Charles Manson was released on Parole, one titled “Kanye West Files Lawsuit Against His Reflection,” and another titled “New NRA-Backed Bill To Place 3 Day Waiting Period on Becoming Mentally Ill.”

The website has a disclaimer saying it’s not real.

At the bottom of the Ohio River story, the author claims to be “a member of the first graduating class at Harvard University in 1642. I was cryogenically frozen and brought back to life in 1981. I can speak gibberish in 18 different languages and often carry on conversations with myself in all 18.”

“I don’t care if they were all convicts or not. Obviously they had paid for their crimes according to law because they were not in prison. If not then they have paid the ultimate price now and are square with the house now. To speak bad of the dead is just wrong and if u do u r no better than they were at their worst,” one person said.

Added another: “Tru they r dangerous I have the book about them I live n louisville and some of my family is mentioned in the book too.. This ain’t a joke!! We have serial killer in kentucky way to close to home.”

But others weren’t as gullible.

“OMG! People people people. This is one of those fake news sites. I’m a Kentucky EMT, and KY law does NOT require resuscitation measures on an obviously DEAD body! And there is no Cpt Owen St Pierre of the Henderson PD. Wow, I don’t see how websites are allowed to report false news like this. You’d think they would get in some kind of trouble,” one person wrote.