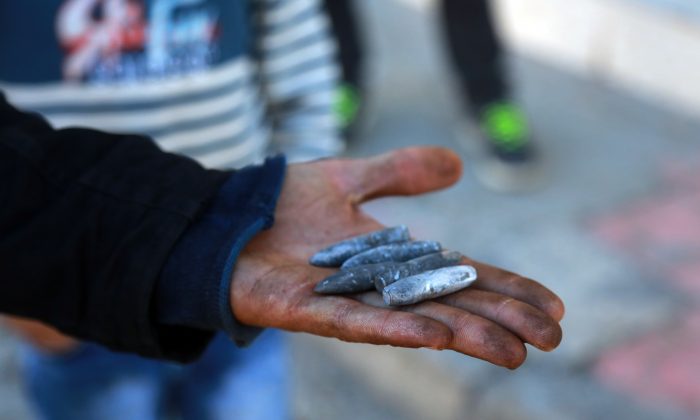 A man shows used bullets near a barricade set up by the militants of the Kurdistan Workers' Party (PKK) in Nusaybin, Turkey, on Dec. 25, 2015. Tens of thousands of civilians in southeast Turkey have been caught in the middle as government forces and Kurdish militants battle it out in urban areas—violence that has shattered hopes of reviving peace talks. Turkish security forces launched a large-scale operation last week hoping to rout militants linked to the outlawed PKK, and say more than 180 of them have been killed. Thousands of troops and tanks have been sent to crush pockets of resistance across mainly Kurdish districts, where PKK fighters and youth have set up trenches to keep them at bay. (AP Photo/Murat Bay)
Middle East

ANKARA, Turkey—A Turkish human rights group says as many as 162 civilians have died since August, caught up in the increased fighting between government forces and Kurdish rebels in urban districts.

The Turkish Human Rights Foundation said late Saturday that 32 children, 29 women and 24 elderly people were among civilians killed in districts where authorities have imposed 24-hour curfews as they battle militants linked to the Kurdistan Workers’ Party, or PKK.

The conflict against the PKK resumed in July, shattering a two-year-old peace process.