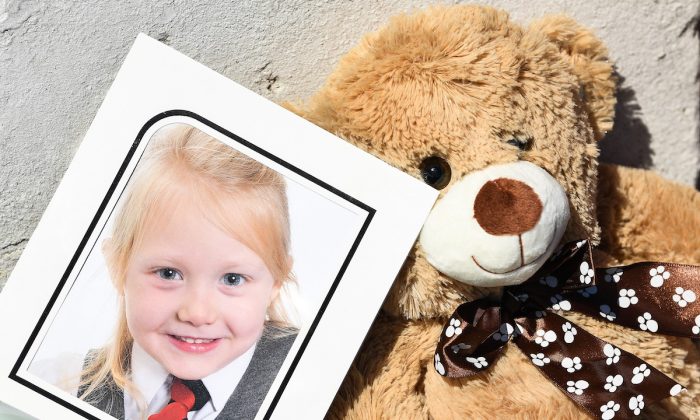 A school picture of Alesha MacPhail is left at a house on Ardbeg road on July 4, 2018. (Jeff J Mitchell/Getty Images)
UK

A 16-year-old boy was sentenced to 27 years in prison for the abduction, sexual assault, and murder of a 6-year-old girl in Scotland in a case that has gripped the interest of the nation.

Having denied his guilt throughout the nine-day trial last month, Aaron Campbell suddenly confessed to psychologists ahead of the sentencing hearing on March 21. The judge said the confession revealed a “cold, calculating, remorseless” individual.

However, the victim’s family are angry that he was convicted as a juvenile and are calling for the law to be changed so that 16-year-olds can be tried as adults.

The schoolboy was found guilty of killing 6-year-old Alesha MacPhail on the Isle of Bute last summer, where she had been staying for a few days with her father and grandparents during the summer holiday.

Her family woke to find her missing from their house on the island in Western Scotland on July 2, the court heard, according to media reports. A short while later, her body was found about a 15 minutes’ walk away, with catastrophic injuries.

Within a day, Campbell’s mother inadvertently put police onto his trail, when she showed them CCTV footage of him leaving the house in the wee hours of the morning, thinking that he might have seen something.

Police discovered more about his movements from other CCTV footage and later found DNA evidence on the body of the victim.

Normally minors cannot be named in such cases. After Campbell had been found guilty, however, the judge was granted permission to release his name by Parliament, as the overwhelming interest in the case had already pushed it far into the public domain.

The vast public interest in the case was also underscored by the extremely rare decision to broadcast video of the sentencing—something almost unheard of in the British legal system.

Alesha’s uncle, CJ MacPahil, has set up a petition for the law to be changed so that 16-year-olds committing serious crimes “such as murder, rape or abduction” are held accountable as adults.

“In the UK you can get married at 16, you can join the army at 16 and you can even leave home at 16, he wrote. “I believe if you can make these choices at the age of 16 and you commit such horrendous crimes you’re old enough to receive the full sentencing as an adult”.

During sentencing, however, the judge had already warned Campbell that he may never be released for the “vile” crimes which had caused “revulsion and disbelief”, reported the Telegraph.

Judge Lord Matthews said that the reports painted a picture of Campbell as a “cold, callous, calculating, remorseless and dangerous individual.”

Having tried to shift the blame onto the 18-year-old girlfriend of the victim’s father throughout the trial, Campbell confessed his offences to a psychologist preparing a report to the court ahead of his sentencing, reported the Daily Record.

In his confession he said he had to “stop himself bursting out laughing during the trial.”

Campbell had been drinking with friends until just after midnight and then went to the house where the girl was staying with the intention of buying some cannabis from the girl’s father, as he had done in the past.

Finding a key in the lock, he let himself into the house. He saw Alesha sleeping after walking into her room, and led her quietly out of the house.

“All I could think about was killing her once I saw her,” he said in his confession, read out to the court, according to the Daily Record.

According to the BBC, Campbell was “addicted” to video games, and had wanted to be a Youtube star since the age of 12. His videos included clips of the game called Slender Man, which revolves around a haunting faceless character who lives in the woods and stalks children.

According to Sky News, Alesha’s mother, Georgia Lochriane, told the court: “Words cannot express how devastated I am to have lost my beautiful, happy, smiley wee girl.”

“I am glad that the boy who did this has finally been brought to justice and that he will not be able to inflict the pain on another family that he has done to mine.”