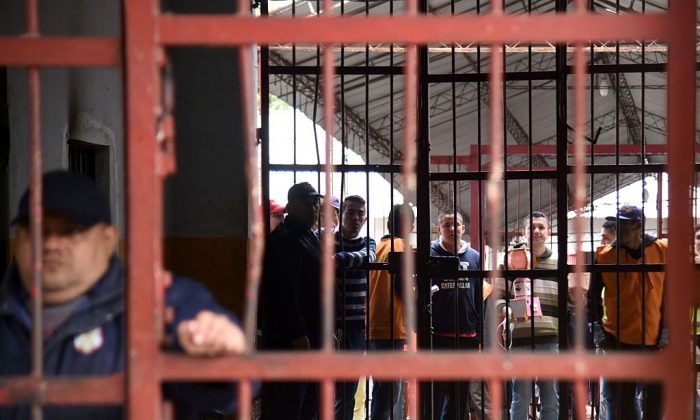 At least 16 prisoners were decapitated and dozens more were killed during a prison riot in Brazil.

At least 57 inmates died in the riots that involved criminal gangs in Para, located in the northern part of the country.

Two guards were also taken hostage as the rival gangs clashed, but were later freed, the AFP news agency reported on July 29.

At least 16 of the victims were decapitated, authorities said. Others were asphyxiated. President Jair Bolsonaro has described plans to “stuff prison cells with criminals” @terrence_mccoy reports from Rio de Janeirohttps://t.co/yi5EaKSENj

The fight began at the Altamira Regional Recovery Center at around 7 a.m. local time, according to a Para state official in the AFP report.

According to BBC, reports in Brazil said that many inmates died of suffocation when the prison was set on fire. A video posted by Brazilian media outlets showed smoke billowing from a prison building, and another showed prisoners on rooftops.

52 dead, including 16 beheaded: Hours-long fighting broke out in #Altamira prison in #Brazilhttps://t.co/HCtVJgsT6e pic.twitter.com/gOJLxk84Lt

The prison has a capacity for 200 prisoners, but it was occupied by 311 inmates, Sky News reported.

Brazil has a prison population of 704,000, although there is only cell space for about 416,000 around the country, the report noted.

In May, some 55 inmates died at prisons in Amazonas state.

#Breaking: At least 50 inmates got killed in #Para prison in #Brazil, after a riot broke out as gangs fought for 5 hours, with other inmates in the prison whom of 16 inmates got decapitated. pic.twitter.com/CUvczqqkMU

Two years before that, about 150 prisoners died during a several-week-long span of violence across several prisons. The violence was blamed by rival gangs.

According to Sky, the riots lasted weeks and were linked to the control of drug-trafficking networks in the area.

In May, Brazil’s justice and public security ministry said it was sending a federal task force to help local officials handle the situation.

“I just spoke with (Justice) Minister Sergio Moro, who is already sending a prison intervention team to the State of Amazonas, so that he can help us in this moment of crisis and a problem that is national: the problem of prisons,” Amazonas Gov. Wilson Lima said.

Several drug-trafficking and other criminal gangs in Brazil run much of their day-to-day business from prisons, where they often have wide sway. The 2017 slayings were largely gang-related, prompting authorities to increase efforts to separate factions and frequently transfer prisoners.

Authorities haven’t yet said whether gang wars were behind the latest blood-letting.

Moro had to send a federal task force to help tame violence in Ceara state in January that local officials said was ordered by crime gang leaders angered by plans to impose tighter controls in the state’s prisons.