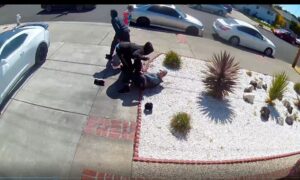 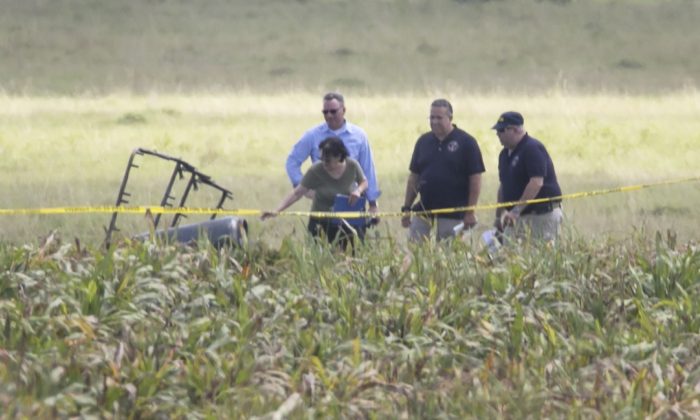 The partial frame of a hot air balloon is visible above a crop field as investigators comb the wreckage of a crash Saturday, July 30, 2016, in Central Texas near Lockhart, Texas. Authorities say the accident caused a "significant loss of life." (Ralph Barrera/Austin American-Statesman via AP)
Crime and Incidents

Sixteen people died in a hot air balloon crash on Saturday, July 30, at about 7:40 a.m. in a pasture near Lockhart, Texas, according to police.

“Words cannot express how saddened we are by this tragedy and offer you our sympathy for your profound loss,” a statement from the Caldwell County Office of Emergency Management said.

Names of the victims haven’t been released, but the pilot was identified as Skip Nichols of Heart of Texas Hot Air Balloon Rides.

Several people who say they are close friends of Nichol have confirmed he died in the crash, according to Facebook posts.

People have posted dozens of condolences on Nichols’ Facebook page.

The company offers rides in the San Antonio, Houston, and Austin areas, according to its website.

The National Transportation Safety Board (NTSB) has launched an investigation into the crash but it will take some time to determine the cause. The FBI and Federal Aviation Authority will join the investigation.

One eyewitness, Margaret Wylie, said she heard a popping sound and then saw a ball of fire near power lines that cross the field where the crash occurred. She thought the sound may have been the balloon hitting the power lines.

Contact with power lines was the most common cause of fatal balloon incidents in the past 20 years, a review of NTSB data showed.

Striking a power line may cut the balloon basket from the balloon itself, electrocute the passengers, or cause “[v]iolent arcing and fire,” Canadian hot air balloon pilot Ken Rolland wrote on Quora.

The Saturday crash is not only the most deadly hot air balloon accident in U.S. history, but also the second most deadly in the world, trailing only the crash that claimed 19 lives in Luxor, Egypt, in February 2013.

Still, fatal balloon accidents remain a rarity. There have been 12 fatalities in the past decade, NTSB data shows.

A commercial balloon pilot has to fly for at least 35 hours before getting a license, according to the Balloon Federation of America.

The non-profit association of balloonists wouldn’t comment on the circumstances of the crash while the NTSB investigation is ongoing.

“I would urge everyone to pause, take a deep breath and avoid speculation right now,” the federation’s president Dean Carlton stated in a press release.