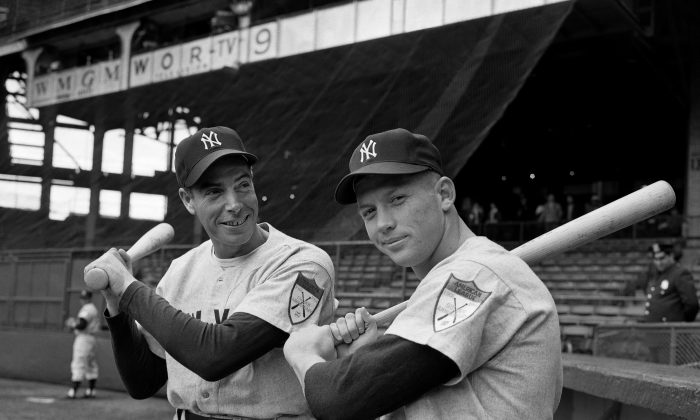 And now the numbers keep coming. Reaction has been so positive, that herewith the latest installment for numerals for the team from the Bronx. Please send along your own numbers

Whitey Ford’s Number retired in 1974. The slick southpaw wore number 19 as a rookie. Returning from the army in 1953, he wore number 16 for the rest of his career.

Number of career homers Babe Ruth’s hit off Rube Walberg, most off any pitcher.

Bill Dickey played his entire 17 season career as a Yankee.

In 16 All Star games, Mickey Mantle struck out a record 17 times.

Late in his career, Gehrig’s hands were x-rayed and doctors spotted 17 fractures that had “healed” while he continued to play.

Roy White, franchise record for sacrifice flies in a season, 1971.

On his 17th birthday in 1985, Bernie Williams signed a contract to play professional baseball for the Yankees.

Since their first title in 1923, the Yankees have not gone longer than 18 years without a world championship.

Joe DiMaggio’s original uniform, number given to him by equipment manager Pete Sheehy and later changed to Number 5.

Babe Ruth and Lou Gehrig in a decade of playing together homered in the same inning 19 times.

The 1927 Yankees won the pennant by 19 games, using only twenty-five players. Not one roster change was made that season.

Number of managerial changes Steinbrenner made in eighteen years, before Buck Showalter came along and lasted four years as manager.

Babe Ruth hit 21 of his 60 homers in 1927 with the same bat. Whenever he homered, he’d carve a notch around the trademark.

Yogi Berra had an incredible total of 21 World Series appearances as a player, coach or manager.

Since Paul O’Neill’s retirement after the 2001 World Series, no Yankee has worn that number. Although Latroy Hawkins actually wore #21 to honor Roberto Clemente in 2008, Yankee fans were not happy.

Allie Reynolds number 22, not retired, but he earned a plaque out in Monument Park.

Most hits recorded in a World Series sixth game, 2001.

The 1909 Highlanders improved upon their previous seasons win total by

Most consecutive games with a home run, 1941.