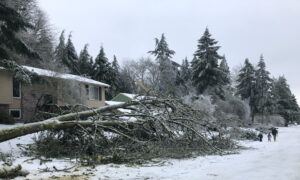 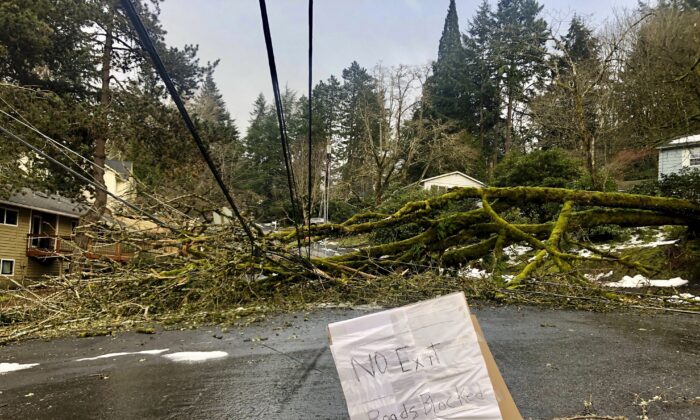 A large tree downed in a weekend ice storm sits atop power lines in Lake Oswego, Ore., on Feb. 17, 2021. (Gillian Flaccus/AP Photo)
US

150,000 Without Power as Outages Persist in Oregon

PORTLAND, Ore.—Nearly 150,000 customers remained without power Wednesday in and around Portland, Oregon, nearly a week after a massive snow and ice storm swept into the Pacific Northwest, taking out hundreds of miles of power lines as ice-laden trees toppled.

The damage wrought by the storm to the power system was the worst in 40 years, and more than 2,000 power lines—about 208 miles in total—were still down, said Maria Pope, CEO of Portland General Electric. At the peak of the storm, more than 350,000 customers were without power, and 5,000 power lines and three substations were down.

“These are the most dangerous conditions we’ve ever seen in the history of PGE,” said Dale Goodman, director of utility operations, who declined to predict when all customers would have power restored. “Hopefully in the next day or two we’ll get ahead of this thing and start making more and more progress—as Mother Nature allows.”

The storm came in three staggered waves starting Friday night, and customers were losing power faster than crews could restore it through the weekend, Pope said. More than 7,000 crew members from as far away as Montana and Nevada were helping restore a power grid that could be down for at least several more days.

There was still a risk of additional power outages from more water-logged trees crashing down as ice melts, the utility said. Many school districts in the hardest-hit areas canceled classes for a second day because of internet outages that made distance learning impossible.

Gov. Kate Brown has declared a state of emergency and issued a warning Wednesday to hotels that authorities would investigate any reports of price gouging as residents sought out warm places to stay.

Residents who had been without heat or electricity for six days struggled to get by as crews worked to restore power.

Residents chopped up wood from fallen trees to burn in fireplaces, used melting ice to keep food cold and shared propane heaters, flashlights and battery packs. Those with gas stoves boiled water and made soup for neighbors with electric ranges.

In some areas, the power loss also meant no cellphone service, leaving residents unable to even report outages to the utility.

In one of the harder-hit areas in Portland’s southern suburbs, John and Lisa Conner finally got a generator late Wednesday after four days in temperatures that hovered near freezing inside their home.

What began as a fun, and rare, snowy weekend took a scary turn for the couple and their 14-year-old daughter on Sunday night when a large oak tree pierced their bedroom ceiling, leaving a two-foot hole that sent cold air pouring in.

“We were all nervous ’cause you could just hear things cracking and falling and watching all of it,” Lisa Conner said. “I hate saying it this way, but it was like a war zone around here.”

Several days after the storm, Conner’s neighborhood was still littered with downed trees blocking roads and branches dangling from power lines. Repair crews were making their way into the area for the first time Wednesday.

The Conners remained in their home as they waited for visits from their insurance company, contractor and arborists to assess the damage–and the damage to other houses in the neighborhood that were destroyed during the storm.

“Everybody is so busy,” she said, “because we are not the only ones having issues.”

By Sara Cline and Gillian Flaccus