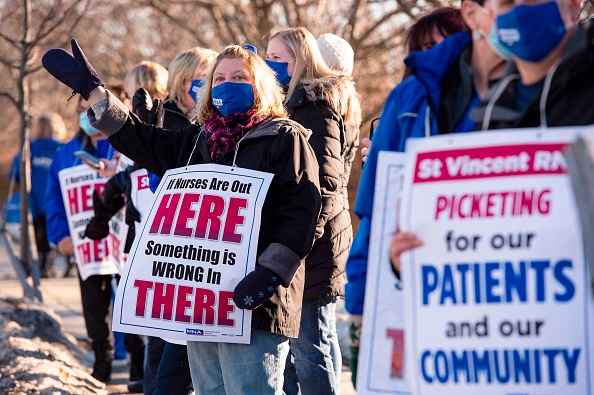 Registered nurses and supporters stand in a picket line and wave to cars as they drive by outside St. Vincent Hospital in Worcester, Mass., on February 24, 2021. (Photo by JOSEPH PREZIOSO/AFP via Getty Images)
Regional & Local News

About 15,000 union nurses at 15 hospitals across seven different health systems in Minnesota have walked off the job, protesting understaffing and overwork in what’s believed to be the biggest strike of private-sector nurses in U.S. history.

Nurses in the Minneapolis and Duluth areas are complaining about low pay, a dearth of resources, and the inability to care for patients properly, such as running wards without lead nurses, and poor shift-scheduling practices.

“I can’t give my patients the care they deserve,” said Chris Rubesch, the vice president of the Minnesota Nurses Association and a nurse at Essentia Health in Duluth, according to The Washington Post. “Call lights go unanswered. Patients should only be waiting for a few seconds or minutes if they’ve soiled themselves or their oxygen came unplugged or they need to go to the bathroom, but that can take 10 minutes or more. Those are things that can’t wait.”

At a Sept. 1 news conference, Minnesota Nurses Association President Mary Turner said, “Our health care and our profession are in crisis.”

“Everywhere in Minnesota, nurses have watched CEOs with million-dollar salaries understaff our units, pushing us to do more with less, even before the pandemic hit,” she said, adding that a three-day walkout may not be enough.

Brianna Hnath, an intensive care nurse at North Memorial, said during the news conference that patients were waiting for 14 hours to be seen in the emergency room.

“If things continue on as they are, this will be the new normal.”

Besides higher pay, nurses are demanding sick and parental leaves.

While negotiations have been continuing since March, the union decided to proceed with the strike because of the hospitals’ offer of about 10 percent wage increases over three years. The union had asked initially for a 37 percent boost, before settling on 30 percent.

A spokesperson for the Twin Cities Hospitals Group called the request “unreasonable, unrealistic, and unaffordable,” according to the Minnesota Reformer.

“Nurses have steadfastly refused to go to mediation,” Paul Omodt, a spokesman for the Twin Cities Hospital Group, which represents four hospital systems, told The Washington Post. “Their choice is to strike. This strike is on the nurses.”

Conny Bergerson, a spokeswoman for Allina Health, told the newspaper, “Rushing to a strike before exhausting all options, such as engaging a neutral federal mediator, does not benefit our employees, patients, or the communities we serve.”

Jill Ostrem, the president of Allina Health’s Mercy and United hospitals, told Fox that her hospitals have been preparing for the strike.

“We work with our staffing agency, and they source nurses from all over the country with experience, talent, and skill. They’re reviewed, vetted, and they all come through and have a Minnesota license,” she said.

Around 2,000 traveling nurses have been recruited to substitute at four health systems associated with the Twin Cities Hospitals Group.

Officials of the nurses association didn’t respond by press time to a request by The Epoch Times for comment.