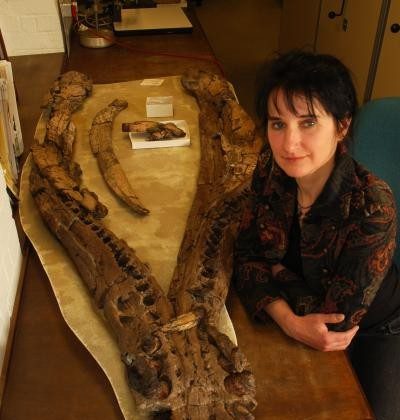 Dr. Judyth Sassoon of the University of Bristol, U.K., with the lower jaw of the Westbury pliosaur.
Science

Even Jurassic killers succumbed to old age, reveals research on the fossil jaws of an ancient sea reptile by scientists at the U.K.’s University of Bristol.

A degenerative condition similar to arthritis caused the giant pliosaur’s jaws to become misaligned. But being a top predator meant that even with this disability, the pliosaur could live on in old age, says Dr Judyth Sassoon, who studied the specimen for her M.Sc. research.

“There is evidence of erosion in the jaw joints, probably the result of wear and tear on the cartilage, so it is probably more accurate to call the condition an arthrosis,” Sassoon explained in an email. “It is similar to erosive conditions in bones of extant animals and humans.”

This is the first time such a condition has been seen in a fossilised Jurassic reptile.

The 1.8-metre-long (about 6-feet-long) skull of the pliosaur, identified as Pliosaurus, was unearthed in a quarry in Westbury, Wiltshire, in 1994. It was taken to the Bristol City Museum and Art Gallery, where it was carefully cleaned and reconstructed.

Pliosaurus inhabited the Jurassic seas around 150 million years ago. It was 8 metres (about 26 feet) long, with a large crocodile-like head, short neck, and whale-like body with four flippers.

The fossil pliosaur is thought to be that of an old female because of its large size and the fact that the bones are fused, indicating the reptile had reached its full adult size. The identification of the pliosaur’s gender is much more speculative though, Sassoon said.

By comparing the skull to that of another pliosaur skull found in the same location, the researchers noticed a bony crest on the top of the skulls differed in size. In some animals, these kinds of differences can be seen between males and females, a phenomenon known as sexual dimorphism.

“In extant mammals such as gorillas and lions, males often possess a higher parietal crest, which acts as an anchor for powerful jaw closing muscles, and this may have been true in pliosaurs also,” the researchers wrote in the paper, published online in the journal Palaeontology on May 16.

Pliosaurs are thought to have been pursuit or ambush predators, feeding on squid, fish, and other marine reptiles, though they may also have been scavengers. Having misaligned jaws and an infection in one of its 20-centimetre-long (almost 8-inch-long) teeth must have been painful, but didn’t immediately lead to its death, say the researchers.

“In the same way that ageing humans develop arthritic hips, this old lady developed an arthritic jaw, and survived with her disability for some time. But an unhealed fracture on the jaw indicates that at some time the jaw weakened and eventually broke,” said Sassoon in a press release. “With a broken jaw, the pliosaur would not have been able to feed and that final accident probably led to her demise.”

The fracture was investigated with X-rays, and no evidence of healing was seen. While it is likely the fracture happened while the pliosaur was still alive, it may possibly have broken after death as the carcass was lying on the sea bottom.