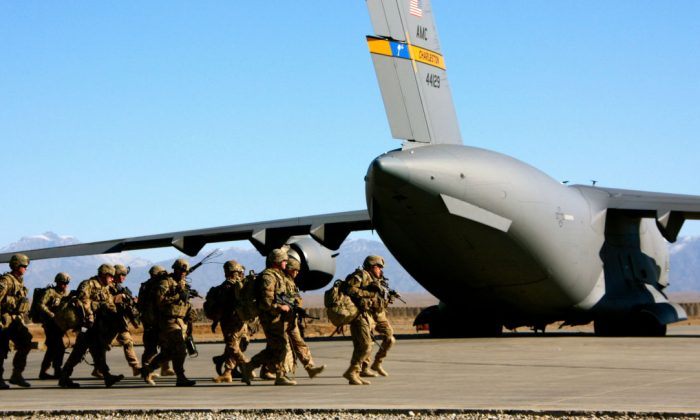 In July President Barack Obama announced he would leave 8,400 U.S. troops in Afghanistan until the end of his term. (Nolan Peterson/The Daily Signal)
Opinion

KYIV, Ukraine—My brother Drew, a former Air Force captain, told me one of the worst stories I’ve yet to hear from the wars in Iraq and Afghanistan.

He was riding in a convoy from Bagram Air Base to Kabul during a deployment to Afghanistan in August 2010.

This particularly dangerous stretch of road was known as “suicide alley” due to the frequency of Taliban improvised explosive device attacks. Most of the IEDs the Taliban used in this area were physically connected to detonators by a thin copper “piano wire,” which made them immune to jamming.

These hard-wired IEDs required precision from the attacker to time the explosion with passing vehicles. So the best defense was to drive fast and not stop—no matter what.

“The Taliban would do anything to get us to stop,” Drew later told me. “But as soon as you stop or open your door, you’re dead.”

Suddenly, there was the high-pitched squeal of brakes and the deep bass thump of impact. Drew instinctively faced forward, only to see a young girl, maybe five or six years old, split in two over the hood of the truck.

There was a lot of blood. People inside the truck were yelling and cussing. The guy in the front passenger seat yelled, “Go, go, go.”

“We just ran over a f—ing kid,” someone else said.

The Face of Evil: Surveying the ISIS Killing Fields in Northern Iraq

The Afghan driver fought through his instinct to stop the truck. He knew this was no accident.

The driver later explained that he saw a man kick the young girl into the road. This was a tactic the Taliban used to set up ambushes on NATO and Afghan government convoys.

But the driver didn’t fall for the Taliban ploy. He punched the gas and kept the truck moving, thus saving the lives of my brother and everyone else inside from the ambush that was sure to follow.

“It messed with our heads,” Drew said. “But I’m sure if we stopped, they had some plans for us.”

Six years later, Drew’s sentences sometimes faded into a whisper as he explained that day, his mind replaying images and sounds no words can recreate. That kind of barbarity wounds the souls and consciences of the troops who witness such things.

“It definitely makes you question whether we are doing more harm than good over there,” Drew said. “Who are these people, the Taliban? These are not human beings. There is no bringing these people back. And if they are willing to do this to win, there is no bomb that can defeat that. How do you destroy someone that doesn’t care about being destroyed?”

Fifteen years after the Sept. 11, 2001, terrorist attacks, we still haven’t figured out how to defeat an enemy that, as my brother said, “doesn’t care about being destroyed.”

U.S. troops, sailors, airmen, and Marines are still conducting combat operations against Islamist terrorist groups in Iraq and Afghanistan, as well as in other theaters such as Syria and Libya, across Africa, and in the Philippines.

Those of us who volunteered for military service in 2001 are now at the tail end of young adulthood. Many of us have moved on to new endeavors. Some have decided to remain in the military and will comprise the next generation of battle-tested American military leaders. They will likely be fighting the same enemy for the rest of their careers.

All of us who served have friends or acquaintances who died in combat. And we all know someone who bears the physical or emotional wounds of war.

There is an ideal, I think, which motivated most of us who served after 9/11—some reason that justified the unrecoverable currency of youth we voluntarily spent in Iraq, Afghanistan, and other places. We thought it was worth it. Yet, it’s hard not to be jaded after 15 years of war.

I remember the conversations I had with the older pilots during my first deployment to Afghanistan as a special operations pilot.

They explained to me how some of the Taliban commanders we were going after were the same militants they had successfully captured years ago. The enemy would spend a year or two in some prison, they explained, and then be released, inevitably making their way back to the battlefield.

“It’s hard not to feel like my career has been a gigantic waste of time,” I remember a lieutenant colonel telling me on the walk to dinner at Bagram Air Base one night.

‘The Sound of God’: In Iraq, US Airpower Bolsters the Peshmerga’s Fight Against ISIS

“I’ve deployed eight times,” he said. “I’ve missed my kids growing up, I’ve missed a decade with my wife. For what? Seriously. What have we done here?”

Those words stuck with me, particularly since it was my first deployment. I was mesmerized by the epic significance of going to war for the first time. And like most first-timers (FNGs as we were delicately called—there are no microaggression trigger warnings in the military), the experience was a rite of passage, somehow validating my place among all those who had stepped up and fought for our country after 9/11.

Consequently, the cynicism of the older pilots was particularly deflating. I began to suspect that this war was pointless and unwinnable.

What were we fighting for?

This might sound dark or off-putting to those who have never been in combat or sent a loved one off to war, but when I hugged my brother good-bye before each of his deployments to Afghanistan, I found myself purposefully emblazoning the moment in my mind, worrying that it could be the last time I ever saw him.

I found myself doing something similar before I left for Afghanistan and Iraq as a pilot, and each time I went to Iraq, Afghanistan, and Ukraine as a war correspondent. I made every farewell a complete one, with nothing left unsaid. The possibility of the war killing me loomed over every good-bye.

War does that. It makes you see things a little differently. It reminds you that life is temporary, and you’re never able to shake the feeling that everything you do in a war zone you might be doing for the last time.

It also evokes one word, over and over again in your mind: Why.

Why am I here? Why is this war being fought? Why is the enemy fighting? Why can’t we just pull chocks and go home?

When Drew volunteered to deploy to Afghanistan for a second tour in 2013, there were many who asked him why.

Why would you want to put your life on the line again? Someone else could just as easily go and do it for you. This war isn’t worth it.

What’s the answer? Former Army Sgt. 1st Class Jeffrey Martin, a veteran of six combat deployments, including Desert Storm and the 2003 invasion of Iraq, said it well: “When the bullets are flying and s— starts blowing up, you’re not thinking about any of that duty, honor, country bulls—. You’re just thinking about taking care of your buddy next to you and making it out alive.”

Martin’s words echoed in Drew’s explanation for volunteering to return to Afghanistan for a second tour. “There are people still fighting over there,” he said. “I’d feel like I wasn’t doing my job if I didn’t do something to help them.”

That innate, unexplainable sense of duty still inspires thousands of young American men and women to voluntarily risk their lives and spend months away from their homes and families in service to a nation that has tuned out their wars.

Think about the young private who deploys to Afghanistan or Iraq. She’s away from her family for months. She goes to bed at night knowing that a Taliban or Islamic State rocket could come through the ceiling in the night, killing her as she sleeps. Maybe she experiences something like what my brother saw on that road in Afghanistan.

After her tour is over, she comes home, arriving late at night on some contracted airliner at one of the major hubs for returning troops like Baltimore-Washington International Airport. There’s probably elevator music echoing in the late-night silence and some janitors waxing the floor as she waits in line to get her passport stamped and go through customs.

The next morning she catches a connecting flight home and maybe she has a boyfriend or a husband waiting to pick her up at the airport. A few old vets might shake her hand as she waits for her bag. Maybe she goes out to Chili’s or Applebees for a celebratory dinner that night, and then that’s it.

She slides back into anonymity and normal life. The time spent in service to her nation is a résumé bullet. It’s like it never even happened. Except for that soldier.

It’s hard for her to truly enjoy life in peace because her wars haven’t ended yet.

Now she feels like a foreigner, even in places that should feel like home. Moving at a different speed than everything and everyone else, not able to connect with the rest of America. She’s not jealous of what everyone else has, only envious that they can so easily enjoy it.

So what did my generation of service members fight for?

After 9/11 there was a job that had to be done, and we volunteered to do it. We went because we knew others would go, and we wouldn’t let them go alone.

Soldiers like my brother understood that there is a cost to be paid for our way of life by whoever has the courage to step forward and earn it for the rest of us.

When we go out to eat at nice restaurants and see movies and drink beer and are able to not care about the dark places in this world, that is my generation’s gift. Cherish it.

A select slice of America has borne the trauma and sacrifice of the past 15 years of war. The volunteer fighting force comprises about 0.5 percent of the total U.S. population, less than 8 percent of the U.S. population has served in the armed forces, and only one in five members of the U.S. House and Senate is a veteran, compared with three out of every four in 1971.

In 2009, then-Defense Secretary Robert Gates said, “Whatever their fond sentiments for men and women in uniform, for most Americans the wars remain an abstraction. A distant and unpleasant series of news items that do not affect them personally.”

Americans today are the most fortunate group of human beings who have ever lived. We have become used to the comforts of peace in our homeland, and forget that peace is not the consensus experience in which many humans now live or have lived throughout history.

The Sept. 11, 2001, attacks were a devastating reminder of the dark reality of the world that exists beyond our borders, from which we are cocooned by the privilege of our prosperity and the protection of our all-volunteer armed forces.

My generation served to keep those dark forces at bay, so that the kind of brutality we all witnessed 15 years ago, and which my brother experienced on that road in Afghanistan in 2010, will remain an abstraction for the majority of Americans.

That’s what we fought for. And that’s why some of us keep going back.