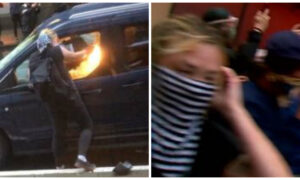 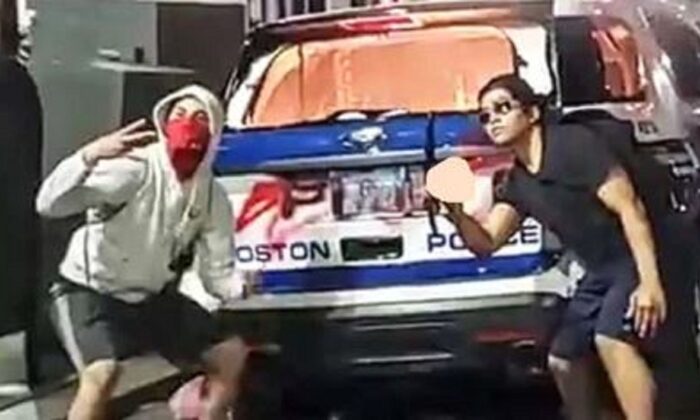 Two males pose in front of a police car that was vandalized and set on fire in Boston, Mass., on May 31, 2020. (FBI)
Crime and Incidents

A 15-year-old was arrested Thursday evening by Boston police officers after authorities released pictures showing two males posing next to a police car that was vandalized and set on fire during riots.

The teenager, who wasn’t named, was arrested on a Boston Juvenile Court warrant for delinquent to wit: arson of a motor vehicle and inciting a riot, police officials said in a statement.

The teen resides in Framingham, a city situated about 22 miles southwest of Boston.

Members of the public coming forward to share tips helped lead investigators to the 15-year-old.

FBI officials released photographs and video footage showing the two men near a police car in Boston on May 31 between 9:30 p.m. and 10 p.m.

Watch this video to see if you can help @FBIBoston @bostonpolice @BostonFire identify two individuals who we believe may have information relevant to the vandalism & arson of a #BPD cruiser on 5/31/2020. Call 857-386-2000 or email https://t.co/48YS0b0hkh pic.twitter.com/IDZ6acEjGf

The car was vandalized after officers who responded to a call for assistance parked it near Beantown Pub, close to Suffolk University, and left on foot. After several people broke the car’s windows, they set it on fire.

The males “may have information relevant to the ongoing investigation” into the vandalism and arson, the FBI said in a wanted poster. A similar statement was circulated by the Boston Police Department.

Protests sparked by the death of a black man, George Floyd, in policy custody in Minneapolis erupted in most major cities in the United States in late May. Within days, some devolved into violence, with looting and other crimes committed en masse.

Law enforcement officials have been tracking down some of the culprits, charging dozens so far.

A local resident, Lucey was seen by witnesses setting fire to a blanket and placing it underneath a police cruiser parked at West Street and Mason Street on June 11.

Witnesses stomped out the flames and officers later found Lucey in Copley Square. He was charged with two counts of arson of a motor vehicle.