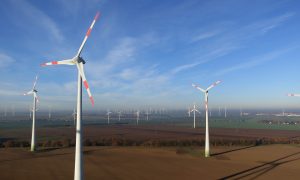 A group of scientists has published a plan for the United States to have all of its energy come from renewable sources by 2050, an ambitious goal that carries a $15 trillion price tag.

Mark Jacobson, a professor of civil and environmental engineering at Stanford, and his co-authors drew up the plan based on the capability of existing technology that draws energy from wind, water, and solar (WWS).

The plan tailors the composition of renewable energy sources to the individual geography of each state, with an interactive infographic of the distribution available on The Solution Project website.

South Dakota, for example, would get 60 percent of its energy from inland wind energy, whereas Alabama would only get 5 percent from the same source.

Once completed, half of the nation’s energy supply would come from wind, 45 percent from solar, and the remaining from hydro and geothermal sources. It would call for a little under half a percent of the country’s land to be covered with solar panels and wind turbines.

The estimated cost only covers the construction of renewable energy infrastructure to supply the existing energy needs of the entire country, but assumes that energy-consuming technology, such as automobiles, will naturally convert to being fully powered by electricity—not an unreasonable assumption, given that Tesla plans to introduce a $35,000 electric model in 2017.

The upfront costs sound daunting, but Jacobson states that making our energy resources renewable will save us money eventually.

The upfront costs of such an endeavor sound daunting, but Jacobson states that making our energy resources renewable will save us money eventually, in the form of fewer visits to the doctor caused by pollution and the other associated costs of a polluted environment.

The plan’s timeline has energy supplies switch to 80 percent renewable by 2030, which is not far off from the goals that some states are preparing to set for themselves: California Gov. Jerry Brown has called for the state to get 50 percent of its electricity from renewable sources by 2030, a goal that could soon be codified into law.

In May, Hawaii set an even higher goal for itself, aiming for complete reliance on renewables by 2045.

As of 2015, the federal government has spent an average of $39 billion annually in the last five years on renewable energy, with solar generating 0.6 percent of the nation’s electricity.

Because the projection of costs is based on existing technology, the actual price of the plan would almost certainly be lower, as the cost of solar panels and other elements of a renewable infrastructure continue to plummet.

The plan isn’t especially beholden to the latest advancement in technology either. For instance, Elon Musk generated a great deal of buzz about solar energy earlier this year when he unveiled Tesla’s personal solar battery storage, declaring that his goal was to have the entire world run on solar energy.

For Jacobson, Tesla’s announcement was not a vital breakthrough, as the cheapest form of storage wouldn’t be in batteries but through thermal.

As audacious as the plan might sound, there are already other countries that have established similar goals for themselves. Late last year, Denmark pledged to commit to 100 percent reliance on renewable energy by 2050. Yet in comparison with the United States, it has a much bigger head start: It already gets 40 percent of its energy from renewable sources.