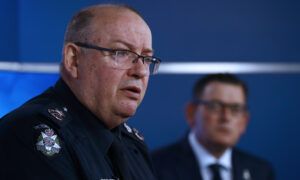 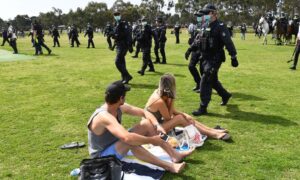 Victoria has had another five COVID-19 deaths, taking the state toll to 771 and the national figure to 859, as new cases dropped to 15.

There was also good news on cases with an unknown source over 14 days, with that figure dropping to 41 in Melbourne.

There are none in regional Victoria.

Authorities want Melbourne’s new case average between 30 and 50 before they consider easing restrictions next Monday.

But aged care remains a key issue for Victoria in its second wave.

It prompted Health Minister Jenny Mikakos to rebuke AdventCare Whitehorse in Nunawading after its staff were filmed last week dancing and mingling with residents without masks.

“Whether it’s pyjama parties or this, it’s really just not good enough,” she tweeted.

That figure must sit between 30 and 50 for authorities to consider a further easing of Melbourne’s strict stage four lockdown provisions Sept. 28.

Premier Daniel Andrews said no final decision would be taken until the weekend, with any confirmation likely to come on Sept. 27.

Meanwhile, the premier also announced three of Melbourne’s five contact tracing hubs would open in the next few days.

Western Health (west), Austin Health (northeast) and Monash Health (southeast) will lead the hubs, which were announced on Sept. 8.

There have been no new cases in that cluster of 43 for two straight days.