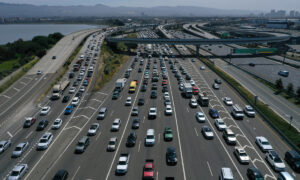 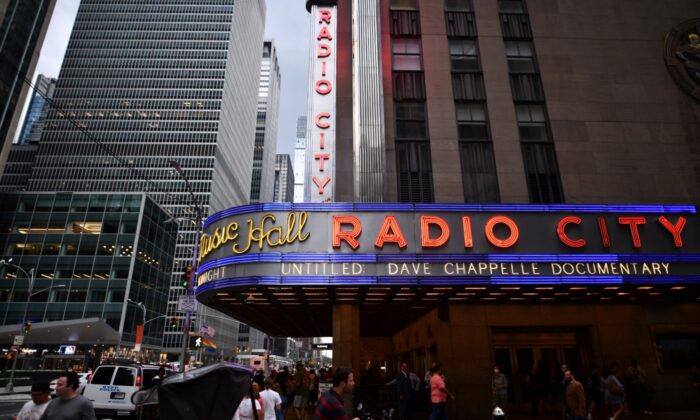 The debut of “Dave Chappelle: This Time This Place,” which chronicles Chappelle’s pandemic stand-up series held in rural Ohio cornfields, marked the first time the hallowed midtown hall was yet again packed since closing in March 2020—a shutdown that put a year-plus’s worth of concerts, including Radio City’s famous Rockettes, on ice for easily the longest spell since the Art Deco venue first opened in 1932.

The premiere Saturday evening, the closing night gala for the 20th Tribeca Festival, was seen as a symbolic reawakening of the arts in New York, where many of the world’s most famous stages—Carnegie Hall, Lincoln Center, Broadway theaters—remain dark.

But after so many pandemic months of silence, that’s quickly changing. On Sunday, Madison Square Garden will host its first full-capacity concert with the Foo Fighters. “Springsteen on Broadway” is set to resume performances on June 26.

Masks weren’t required inside Radio City but proof of vaccination was.

The Tribeca Festival, mostly canceled last year, held its 20th edition largely in-person by relying mainly on outdoor screenings. It opened last week with the New York premiere of “In the Heights,” the acclaimed adaptation of Lin-Manuel Miranda’s Broadway musical and an ode to the north Manhattan neighborhood of Washington Heights. It debuted with screenings held in all five boroughs of New York.

On Saturday, some entered Radio City a little hesitantly. But most seemed invigorated by being back in Radio City for a much-anticipated movie. Joel and Abby Ralph, who wed a handful of months before the pandemic began, were excited to be out together and not in their Upper West Side apartment. “It feels normal-ish,” said Abby.

Kyra Houston, a regular festivalgoer, came with her more reticent friend, Renee Cassell. “I feel happy. I was going through a funk,” said Houston, gazing around. It was her second movie of the day. “I feel like a haze is being lifted.”