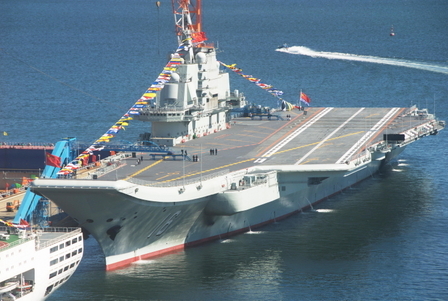 The Chinese regime finished building its first aircraft carrier in a remarkably short time, but reportedly at the expense of 15 lives.

Now known as the Liaoning, the ship was originally a Russian carrier that sat for decades without being completed. The Chinese Communist Party bought and transported the vessel for its Defense Ministry to refurbish in 2011.

State media China Youth Daily reported that the schedule was tight and construction was completed in just 15 months, but an aircraft designer and 14 other workers apparently died in the process.

Normally, it would take the United States three to five years to build an aircraft carrier, but the regime planned to do it in 30 months. However, the winter months were so cold that the men could not work for half that time.

Yet instead of delaying construction, they had to speed it up.

“We used to work and fight together at that time,” said senior engineer Wang Zhiguo, according to the Daily.

He added that the ship could not have been built so fast if the men’s lives had not been sacrificed. “Whenever I think about them, I feel pretty sad because it seems like they are still around me.”

Luo Yang, 51, who designed the J-15 jet that became the first plane to land on the finished Liaoning, died of a heart attack shortly after he watched the landing.

Given the lack of information about the other men who died, it is impossible to know whether the state media’s report is genuine, or whether the news of the deaths was fabricated to instill in the public a sense of sacrifice for the military.

Some Internet users were supportive of the regime. One wrote via Yahoo! News: “Compared to the number of deaths in the Cultural Revolution and the Great Leap Forward, the cost of this carrier is so low. Of course we are going to continue our Chinese dream!”

Most netizens, however, appeared genuinely upset about the deaths and questioned whether navy officials were too eager to earn merit and please their higher-ups by putting the importance of the work above human lives.

“Such a carrier can only be used as a gadget to brag about our military power. Fighting the real aircraft carriers from the United States, it will sink before it even sees where the enemy is,” another wrote via Yahoo! News.

A netizen said on Sina Weibo, China’s version of Twitter: “The blind eager decision makers who view people’s lives as trifles should immediately be punished and removed from their posts. Being 15 months late won’t kill the decision makers, but being 15 months early lost 15 lives.”

Another Weibo blogger wrote: “Mao Zedong’s desire to impress and show off resulted in 50,000 soldiers freezing to death because they were not allowed time to change into winter clothes. To build the Liaoning for the 18th Congress, 15 skilled men died of exhaustion. The war is still here; the reign has not changed.”