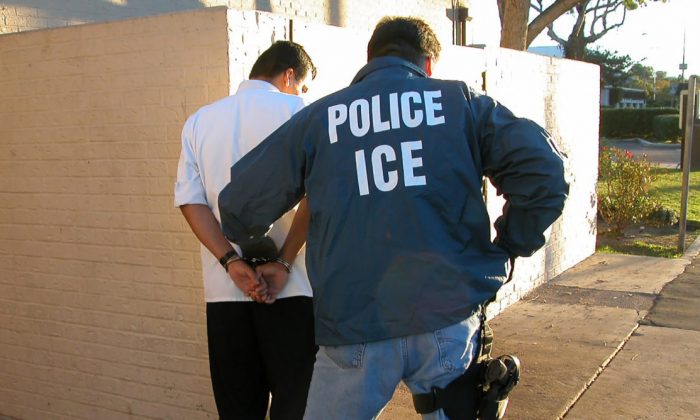 An Immigration and Customs Enforcement agent conducts an arrest. (ICE)
US News

“During the search warrant execution, authorities identified 146 Fresh Mark employees working at the Salem meat processor who were subject to arrest for immigration violations,” ICE said in a news release, adding that search warrants were executed at four locations in Ohio.

“Unlawful employment is one of the key magnets drawing illegal aliens across our borders,” said Steve Francis, HSI special agent in charge for Michigan and Ohio. “Businesses who knowingly harbor and hire illegal aliens as a business model must be held accountable for their actions.”

The arrests are part of a yearlong investigation into Fresh Mark and whether the firm knowingly hired illegal immigrants. It said, “Many of these aliens are utilizing fraudulent identification belonging to U.S. citizens.”

According to Fox8, they will be moved to detention facilities in Ohio and Michigan. Several people were processed and released on humanitarian grounds.

“Fresh Mark is a member in ICE’s IMAGE program, which stands for ICE Mutual Agreement between Government and Employers. However, IMAGE members are not immune from ICE scrutiny or prosecution for workforce compliance violations,” said ICE in the statement.

Veronica Dahlberg, executive director of Latino advocacy group HOLA Ohio, told Cleveland.com that most of the people are from Guatemala.