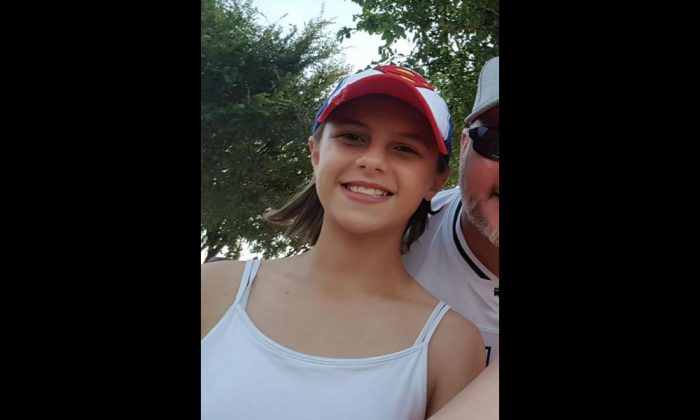 Police have arrested a 16-year-old in relation to the death of a 14-year-old girl in Bedford, Texas, whose body was found in a landfill in June after police say a drug deal went sour.

According to court documents, 14-year-old Kaytlynn Cargill went missing after taking her dog out for a walk on June 19.

Based on interviews, investigators say Cargill went to a dog park near her apartment, but left the dog tied up in order to meet someone to obtain marijuana.

A source told police that Cargill had gone to meet with the suspect, a former roommate of the source, to get marijuana that she was planning to make into “dabs,” a  form of concentrated marijuana, and that afterward was planning to sell the finished product to the suspect for $300.

Cargill met with the suspect twice, and the second time she told the source, “I’m going to get the money,” court documents say. That was the last time the source saw or heard from her.

Cargill’s mother found the dog tied up at the dog park the same day and the family reported her missing after having searched for her themselves.

Cargill’s body was found two days later in a landfill about 10 miles away in Arlington, Texas, and the Tarrant County Medical Examiner ruled her death homicidal violence.

Blood that was later identified as Cargill’s was found in an apartment near where Cargill lived that had been the temporary residence of the suspect, as well as on a hammer that detectives believe was used in her death.

The 16-year-old was arrested on Friday, Sept. 1, at O.D. Wyatt High School in Fort Worth and charged with murder, Inside Edition reported.

The suspect, who was described as an acquaintance of Cargill, was being held at the Tarrant County Juvenile Detention Facility in Fort Worth on $250,000 bond, Bedford Police said.

A GoFundMe page set up to help the Cargill family with memorial expenses raised more than $26,000.

Cargill’s obituary describes her as a natural athlete, an avid trumpet player, a fan of the outdoors, and an animal lover.

“Kaytlynn was an optimist, with a heart bigger than anyone will ever know. Her energy and spirit shone through and was infectious to everyone around her,” it says.