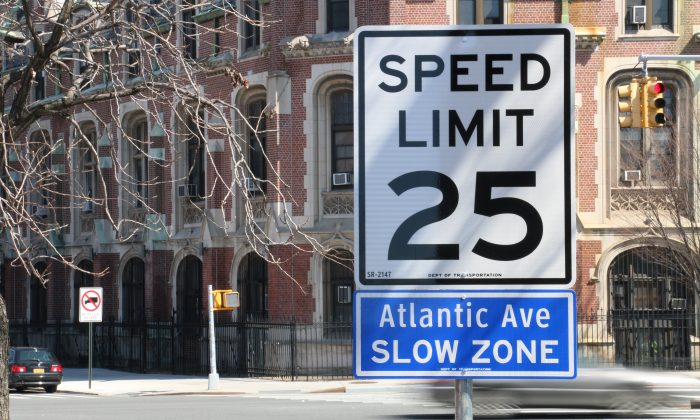 A 25 mph speed limit sign on Atlantic Avenue in Brooklyn, N.Y., on April 9, 2014. A freshman at Brooklyn Technical High School, wants to create a network of student advocates for safe streets in schools across the city. (Allen Xie)
New York

NEW YORK—Alison Collard de Beaufort, a freshman at Brooklyn Technical High School, wants to create a network of student advocates for safe streets in schools across the city.

New York City’s traffic safety plan is ambitious—it calls for 50 major street redesigns a year, investigation of all crashes, and education at every level are among its main starting points to lower traffic deaths to zero within a decade.

Last year, Mayor Bill de Blasio kicked off the Vision Zero initiative, and though there are still points not addressed, pedestrian fatalities have already reached a record low.

I just don’t want to have to go through another loss in this way.
— Alison Collard de Beaufort, founder, Vision Zero Youth Council

Advocacy groups say it has been a much-needed push from the city side, and they continue to push for more and better policies. At its heart, Vision Zero has been a grassroots initiative, albeit often an unfortunate one predicated by tragedy.

After meetings with local officials and other advocacy groups, Collard de Beaufort created the Vision Zero Youth Council (for grades 4–12) and plans to start spreading the word on a large scale this year.

In just over a year, three students at M.S. 51 in Park Slope had died in crashes.

In 2013, 12-year-old Sammy Cohen-Eckstein was struck by a van on his way from school to soccer practice. His death brought grief to all his classmates at M.S. 51.

“The first time, it was really scary, and it was very devastating,” said Collard de Beaufort, who was a friend of Sammy Cohen-Eckstein’s. “Everyone was crying. It was really hard on the school, the family, friends.”

The community created memorials by the crash site, in the neighborhood, at school. Collard de Beaufort and her mother and neighbor drove to IKEA, bought 40 teddy bears, and tied them to trees and lamp posts along Prospect Park West to remind everyone to be cognizant while on the road.

“That was to send a message to drivers: there are kids, there’s a park, it’s a very walkable community. There’s a lot of people with their kids, with their dogs, and they have to be careful,” Collard de Beaufort said.

“She reached out after Naeim was killed and said, ‘we just have to do something,'” Council member Brad Lander said in a recent talk on Brooklyn Independent Media. “Finding that courage to turn that grief into advocacy, we’ve also made some big changes.”

They got the city Department of Transportation, advocacy group Transportation Alternatives, and the school involved. Through word of mouth and Instagram, they’ve gotten about 200 “likes,” and about 30 students came to learn how they could do more at a meeting last week.

Vision Zero is a Swedish initiative to reduce all traffic fatalities to zero, based on the concept that streets should be engineered around human error. In New York, the mayor’s plan focuses on engineering, enforcement, and education.

Collard de Beaufort is spearheading the education effort for students, and she wants to make it fun. The meetings and outreach will be interactive, she said, creating forums for students to give ideas, raise questions, raise solutions, and get actively involved. Spreading the word is her current priority.

At M.S. 51, where Collard de Beaufort’s younger brother is a 6th grade student, DOT has conducted educational programs. They pose traffic scenarios to the students, to create a dialogue of what went right or wrong.

It has been an educational process for Collard de Beaufort as well. “I love my phone. Like a lot of other people I have to put it down and I have to look at where I’m going,” she said. “I think if it’s a habit, it’s a habit you need to break.”

On the street, “everybody should be responsible,” she said, adding that she wants all students to know how to be street safe. “Even if they’re paying attention the driver may not be. You have to be paying attention for two people.”