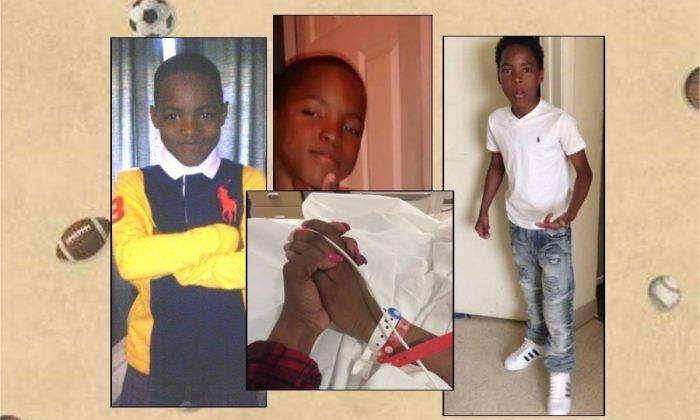 Kemon Battle, 12, in a series of file photos, was shot dead in Portsmouth, Virginia on Dec. 21, 2018. (Memorial Service Funding for Kemon Battle/GoFundMe)
Crime and Incidents

A 14-year-old was charged with voluntary manslaughter in the death of 12-year-old Kemon Battle, who was shot on Dec. 21 in Portsmouth, Virginia.

Police officials haven’t released many details of the shooting but have said that it was “not a random act of violence.”

De’Andre Barnes, a Portsmouth school board member and Battle’s cousin, said that even the family doesn’t know exactly what happened.

But, Barnes told The Virginian-Pilot that from what he understands, the suspect was friends with his cousin.

“They hung together,” Barnes said. “They lived in the same neighborhood.”

Barnes described the alleged shooter as “just another kid.”

“He was just another kid just like all the other kids, when we were out there doing programs he would actually participate in the activities as far as the sports,” Barnes told WAVY. “Now we have two kids who lost their life pretty much.”

Tyquisha Artis, the victim’s aunt, questioned the voluntary manslaughter charge, arguing the alleged shooter should have been charged with something else.

“It feels like justice. It doesn’t feel like closure,” she said. “He got manslaughter, he didn’t get murder. The charges should have a been a little harsher.”

Since the incident, Dionte Artis, Battle’s father, said he hasn’t been able to sleep well. “I’m depressed. I’m hurt. I’m damaged,” said Artis, reported 13 News. He described relief at the arrest but said the pain of losing his first child is unimaginable.

“I hurt inside, I bleed inside. I try to hold my emotions, not showing so much out in public, but at home, I do cry and go through a lot,” said Artis. “I put my loved ones through so much because of what I’m going through.”

A 14-year-old boy was charged Tuesday with voluntary manslaughter in the death of Kemon Battle, 12, of Portsmouth.https://t.co/BjbFyD7SH2

Barnes, Battle’s cousin, said during a city council meeting on Jan. 8 that elected officials have to step up and work on ending violence in the community.

“If they don’t do something about what’s happening in the community that’s going to provide more resources for our children, then something was going to happen,” Barnes said, reported WTKR. “Fast forward to a year later, December 21, my cousin was shot in the next neighborhood.”

He wants the community to invest more money in schools and in programs, such as sports leagues and a basketball court, to give children constructive things to do. He started the Portsmouth City Sports Club in 2014.

“If we don’t pay for our children now, we will pay for them later when they’re getting in trouble,” Barnes said. “When something happens today, when a kid gets shot or a kid goes to jail, the problem didn’t start today. It started a long time ago when they were allowed to choose their path.”

A few days after the shooting, more than 100 people gathered for a candlelight vigil in memory of Battle.

“It’s not what you do with your kids, it’s the love. They don’t want anything else but love, to love them and care,” Artis, said through tears, reported WAVY. “I hurt … I never thought nothing could hurt me, but I hurt. I just want justice.”

Battle’s aunt, Tyquisha Artis, said that parents should hold their children tight and work to guide them in the right direction.

“A 12-year-old little boy did not need to die,” added Pastor Kendrick Turner, a vigil organizer, reported WTKR. “Should not have died at all. He was being a child wanted to play, but in a community like this you have to look over your shoulder and see what’s going to come your way.”

Battle’s legal guardian, who declined to be named, asked at the vigil for whoever fired the gun to turn himself in.

“I just want answers [to] what happened to my baby. He didn’t deserve that. He was 12-years-old and I miss him,” the legal guardian added.