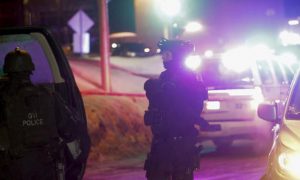 A police car in a file photo. (Pixabay)
Northern California

Police have taken a 14-year-old male student into custody in Napa, California after a possible mass shooting threat was made against two different schools.

The Napa Police Department said the student told a classmate at River Middle School about his alleged plans to attack both the middle school and Vintage High School in the Napa Valley Unified School District (NVUSD). The student later made a specific threat against the classmate.

“When the victim told the student they were going to report this to police and parents, the suspect student threatened to kill the victim,” said the police department in a Jan. 7 press release.

Thanks to the brave steps taken by one Napa Valley student, Detectives in our Investigations Bureau believe a tragedy may have been averted.

See the attached press release for more details and be reassured… https://t.co/riHJsqbEja

Police were notified on Dec. 31, during the school’s winter break about the threats. The victim was able to provide evidence to authorities of both the threats against the schools and against the individual classmate, said police.

A spokesman for the Napa Police Department told the San Diego Union-Tribune that the victim showed text messages to investigators.

Investigators working with School Resource Officers then served search warrants at multiple residences connected with the student on Jan. 2, and further evidence of research and planning into a mass shooting was found.

“We haven’t recovered a bunch of bombs and guns,” Capt. Patrick Manzer told the Union-Tribune. “He was doing his research and trying to plan it, but hadn’t acquired stuff.”

The student was then detained and has remained in custody for the threats against the classmate. The identities of the suspect and the classmate were not released since they are both minors.

“We do not believe there is a current threat to any NVUSD students related to this incident,” said police. “We want to praise the victim for coming forward and talking to their parents and the police. We believe based on the information collected at this point, this was possibly a tragedy averted and are thankful for the information provided to us.”

The school district responded to the incident in a statement on Jan. 8, saying the safety of students and staff was the highest priority. The statement also expressed gratitude to local law enforcement for their quick action and investigation.

The safety of the students and staff at Napa Valley Unified School District schools and facilities is the highest priority for NVUSD, Superintendent Dr. Rosanna Mucetti said today. Her comments come after Monday’s news from… https://t.co/wTAXoHTa14

“Just as importantly, we are deeply grateful to the student who reported concerns to an adult, who then contacted police. As a society, we need to be brave, and willing to say something when we see something. That young person may have literally saved lives by speaking up,” said NVUSD Superintendent Dr. Rosanna Mucetti.

Mucetti said that if there had been an active threat to the community at any time during the investigation, the action taken by the school and local law enforcement would have been much different.

“I want to assure you that we have been in constant contact with the Napa Police Department throughout the incident and had there been an active threat that required families to take action, both law enforcement and the District would have been proactive and clear about that,” stated Mucetti. “Because of the active investigation, which continued into Monday afternoon, we agreed with law enforcement that it was important not to jeopardize the investigation. We informed our River, Vintage and Harvest Middle School families at our very earliest prudent opportunity, given the law enforcement realities.”

All Napa students returned to classes starting on Monday, according to the Union-Tribune.