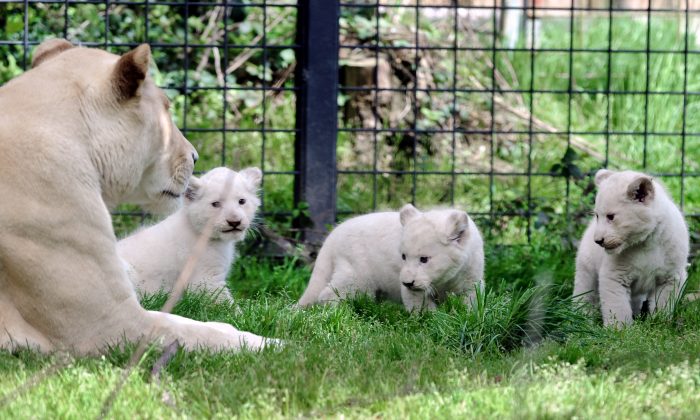 Three white lion cubs play in their pen next to their mother Sweleka (L) at the Pont-Scroff's zoo in Pont-Scorff, western France, on April 18, 2013. (FRED TANNEAU/AFP/Getty Images)
Asia & Pacific

14 white lions were discovered in the Bangkok warehouse belonging to a pet shop owner, it was reported.

The albino lions were imported from Africa along with other protected animals, reported The Associated Press, citing police Col. Ek Ekasart.

Birds, capuchin monkeys, meerkats, tortoises, birds, and other animals were also found in the warehouse.

“We have been monitoring the location for a few days after the neighbors complained about the noise from the animals,” Ek told AP. “And if you looked through the gate, you could spot lions in the cage.”

Ekasart told AFP that authorities were tipped off when neighbors complained.

“We received a complaint about the smell from the neighbours and after investigating we discovered the animals hidden there,” he told the news agency.

Montri and another suspect have both denied any involvement in smuggling illegal wildlife.

AP reported that Montri owns an exotic pet shop in Bangkok’s Chatuchak market. He was previously convicted of engaging in illegal wildlife trading.