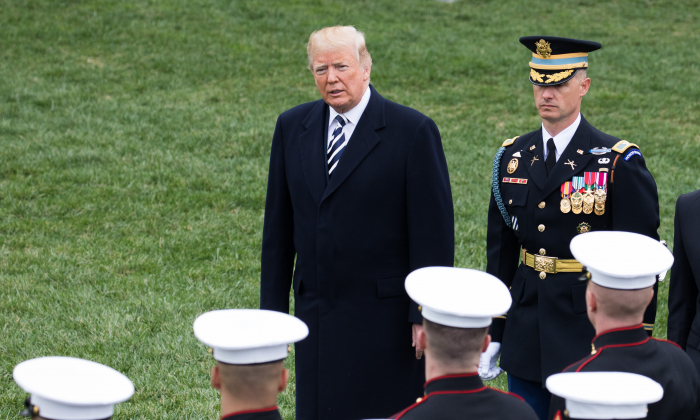 President Donald Trump at the arrival ceremony of the President of France Emmanuel Macron and his wife Brigitte Macron on the South Lawn of the White House on April 24, 2018. (Samira Bouaou/The Epoch Times)
Trump Administration

Record-low unemployment rates were reported in 14 states over the past 12 months, as businesses continue to thrive with the help of President Donald Trump’s tax cuts and economic reforms.

Only 3.7 percent of workers are unemployed in Alabama. Arkansas reached historic low unemployment of 3.6 percent last May.

North Dakota, Texas, and Tenessee also set records over the past 12 months. Unemployment dropped to 3.9 percent in Texas in November and to 3.3 percent in Tennessee in January.

Unemployment rates are below 3 percent in Wisconsin, North Dakota, New Hampshire, Nebraska, Maine, Iowa, and Idaho. Hawaii has the lowest unemployment in the United States.

As unemployment continues to drop, economists expect business to offer higher wages as the supply of workers dries up. In March, the average hourly wages for non-farm employees grew to $26.82 from $26.11 at the same time last year.

Though the gain is modest, the ratio of employers raising wages relative to those who are cutting wages is the best it has been since the National Association for Business Economics began analyzing the data.

The improving jobs market is also drawing people who haven’t worked in a long while.

“The strong job market does appear to be drawing back some people who have been out of the labor force for a significant time,” Federal Reserve Chairman Jerome Powell told the Los Angeles Times. “Anecdotal reports indicate that employers are increasingly willing to take on and train workers they would not have considered in the past.”

Unemployment in Alaska is the highest of all states at 7.3 percent. Alaska’s unemployment is historically above the national average.

Both red and blue states tracked record-low unemployment, showing that the trend cuts across ideological boundaries.