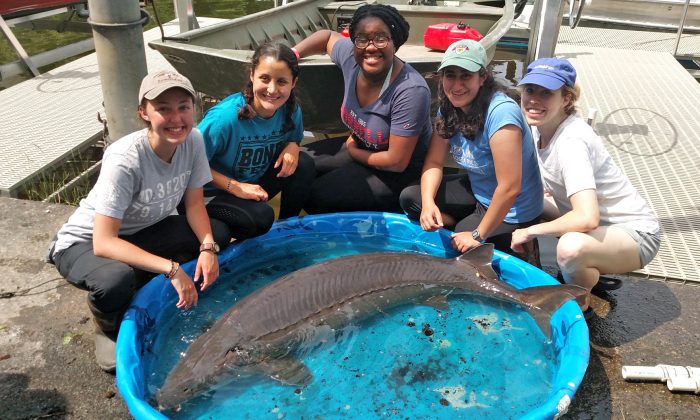 Researchers have caught what they believe to be one of the largest fish ever landed from an upstate New York lake on June 19.

The group from the university’s Biological Field Station confirmed it was the largest sturgeon handled since the station started the sturgeon population surveys back in 2002. The fish measured 72.5 inches long and is estimated to be 20-years-old.

The big catch was one of 10 other sturgeons netted, sedated, measured, and weighed at the lake.

“Samples [are] taken for aging, then fish are tagged and allowed to recover before being released back into Oneida Lake,” the station said. “Twelve standard sites are netted every year in the month of May, and again in June.”

Lake sturgeon are the descendants of prehistoric marine life, according to a research article co-authored by station biologist Thomas Brooking and Oneida Lake Association Board Member Richard Colesante.

Sturgeon populations were once abundant but significantly declined due to overfishing for its eggs and smoked flesh, which were considered to be a delicacy. Dam construction on spawning tributaries and habitat degradation were also factors in New York state deciding to list the species as threatened in 1983. It is unlawful to possess sturgeon and any fishing enthusiast who catches one must release it back into the water unharmed.

“It was this popularity that soon led to their demise,” the article said. “These magnificent fish whose ancestors have been around for more than 200 million years were reduced to remnant populations by humans in a matter of 70 years.”

Female lake sturgeon do not spawn eggs until they are at least 15-years-old, and overfishing has threatened the survival of mature females that are able to spawn. Lake sturgeon can grow to weigh more than 250 pounds, measure longer than 7 feet, and live longer than 100 years.

The program successfully raised fingerlings at the Oneida Fish Cultural Station in Constantia and at the Genoa National Fish Hatchery in Wisconsin before being transported back to New York state waters.

Throughout the years, some sturgeon swam through Oneida and Seneca rivers to Onondaga and Cross lakes. Others migrated through the Oswego River to Lake Ontario, according to CNY Central.

Did you see this? A 72.5 inch, 139-pound lake sturgeon was recently caught in Oneida Lake by researchers working with the DEChttps://t.co/iqMTfY4wS9

“The recent sturgeon captures are almost certainly a direct result of the highly successful stocking program,” the station said. “It will be exciting to see just how large Oneida Lake sturgeon will grow in the coming years.”