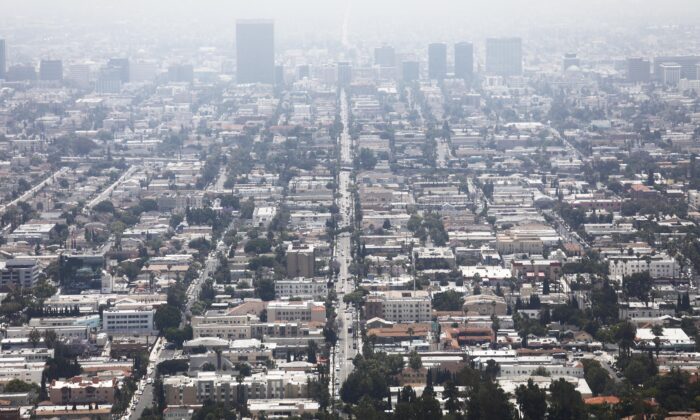 Smog hangs over the city on a day rated as having 'moderate' air quality in Los Angeles, Calif., on June 11, 2019. (Mario Tama/Getty Images)
Environment

More than 137 million Americans, representing over 40 percent of the U.S. population, are living in places with failing grades for unhealthy levels of particle pollution or ozone, according to the “State of the Air” 2022 report from the American Lung Association.

There were 2.1 million more people breathing unhealthy air in the 2022 report compared to the previous year. “Nearly 9 million more people were impacted by daily spikes in deadly particle pollution than reported last year. In the three years covered by this report, Americans experienced more days of ‘very unhealthy’ and ‘hazardous’ air quality than ever before in the two-decade history of ‘State of the Air,’” the April 21 report (pdf) stated.

In its 2007 report, 136 counties from 36 states had received failing grades for spikes in air pollution. This included 31 counties in seven states lying west of the Rocky Mountains. In 2022, 96 counties in 15 states got failing grades, of which 86 were from 11 western states.

Of the top five cities most polluted by short-term particle pollution, four were in California—Fresno-Madera-Hanford, Bakersfield, San Jose-San Francisco-Oakland, and Redding-Red Bluff.

The report found demographic variations in the groups which are at the highest risk of being exposed to pollution. Around 31 million children under the age of 18 and almost 21 million adults over the age of 65 were living in counties with an F grade for at least one pollutant. Around 4.7 million children and 2.8 million seniors lived in counties with an F grade in all three pollutant measures—ozone, 24 hour PM, and annual PM.

Millions of people suffering from health conditions like asthma, cardiovascular disease, and chronic obstructive pulmonary disease (COPD) were living in counties with a grade F for at least one pollutant. Among those with lung cancer, over 66,000 people lived in these regions as of 2018. The report called on the White House and Congress to take steps to reduce air pollution.

“EPA (Environmental Protection Agency) must set stronger standards for greenhouse gas emissions for light-duty vehicles beginning in Model Year 2027. EPA must finalize a strong rule for heavy-duty vehicles this year and adopt an additional rule beginning in Model Year 2030,” the report said while also asking the agency to set a “stronger national standard” for particulate matter and ozone.