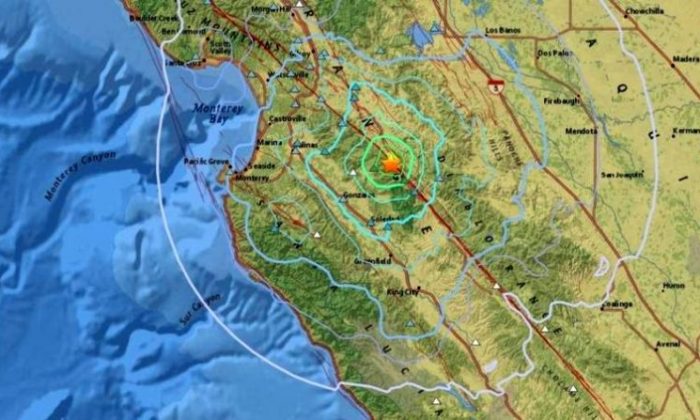 The shake map of the 4.6-magnitude event. (USGS)
US News

Since a 4.6-magnitude earthquake struck on Nov. 13, California’s famed San Andreas Fault has had no fewer than 134 additional tremors.

The 4.6-magnitude earthquake was centered about 13 miles from Gonzales, located near Salinas, along the San Andreas. Some felt it in San Francisco and in parts of the Central Valley.

Is California about to be hit by the 'Big One'? Fears of a massive earthquake rise after 134 mini-tremors rattle the … – Daily Mail https://t.co/q5lBm5bcYD #hng #earthquake https://t.co/e6VEzaKz9h pic.twitter.com/IM3l7hQ0s2

The U.S. Geological Survey said that the area hasn’t stopped shaking. There have been 134 quakes within 3 miles of the epicenter, the agency said, according to SFGate.

About 17 were stronger than a 2.5 magnitude and only six were greater than 3.0, said Ole Kaven, a seismologist with the USGS.

“This one has been a quite productive aftershock sequence,” said Kaven, per SFGate. “We suspect there will be aftershocks in the 2 to 3 [magnitude] range for at least a few more weeks.”

There have been no reports of damage or injuries.

But a 4.6-magnitude quake is on the “higher end of what we expect in terms of magnitude” for that area, Kaven noted.

“Any time there is significant seismic activity in the vicinity of the San Andreas Fault, we seismologists get nervous,” Thomas Jordan, head of the Southern California Earthquake Center, told the Los Angeles Times last year.

“Because we recognize that the probability of having a large earthquake goes up,” he said.

Annemarie Baltay, an expert, said there is nothing to be worried about.

“This is really typical behavior,” she said. “It’s as if someone put an oil can into the fault and lubricated it.”

The Two recent Earth Facing Coronal Holes and New Moon Period may have been the cause of recent San Andreas Earthquake Swarm… just a hunch https://t.co/Il5UTUdJd7 pic.twitter.com/5hNIdGrOCM