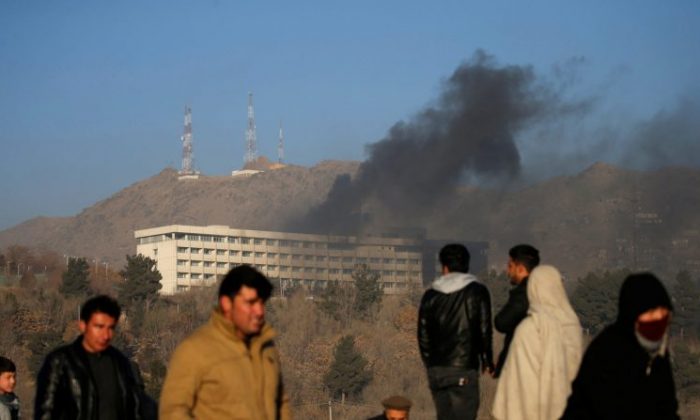 At least 40 people have been killed after gunmen loyal to the Taliban terrorist group stormed the Intercontinental Hotel in Afghanistan’s capital, Kabul, over the weekend.

The attack lasted more than 13 hours before the final terrorist was killed, a government official confirmed to Fox News on Sunday.

Reuters reported that at least 30 people died in the assault, but it noted that the figure of the casualties might be much higher. Six of those who were killed were identified as foreigners.

At least 150 guests at the Intercontinental Hotel, including 41 foreigners, were able to escape the attack and as parts of the building caught on fire. Some were spotted climbing down bed sheets that tied together and dropped from windows. Others were rescued by Afghan security forces, Reuters reported.

It’s not clear if any Americans were staying at the hotel during the time of the attack.

The U.S. Embassy in Kabul issued a warning to American citizens on Thursday. “We are aware of reports that extremist groups may be planning an attack against hotels in Kabul,” it said.

The U.S. Ambassador to Afghanistan, John R. Bass, stated that “such violence has no place here or anywhere in the world,” adding that American officials are in “close contact with Afghan authorities, who are continuing to investigate the incident.”

Local airline Kam Air said around 40 of its pilots and aircrew—many of whom are foreigners—were staying in the hotel, and as many as 10 had been killed. Local media reports said the dead included Venezuelans and Ukrainians.

The Taliban, which attacked the same hotel in 2011, claimed responsibility, its spokesman Zabihullah Mujahid said in a statement.

A statement from the interior ministry put the blame on the Haqqani network, a group affiliated with the Taliban that is notorious for its attacks on urban targets.

Abdul Rahman Naseri, a guest who was at the hotel for a conference, was in the hall of the hotel when he saw four gunmen dressed in army uniforms.

“They were shouting in Pashto (language), ‘Don’t leave any of them alive, good or bad’. ‘Shoot and kill them all,’ one of them shouted,” Naseri said.

“I ran to my room on the second floor. I opened the window and tried to get out using a tree but the branch broke and I fell to the ground. I hurt my back and broke a leg.”

Even after officials said the attack was over, sporadic gunshots and explosions could still be heard from the site.