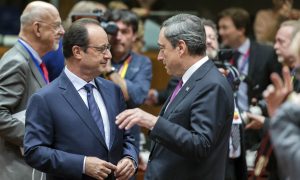 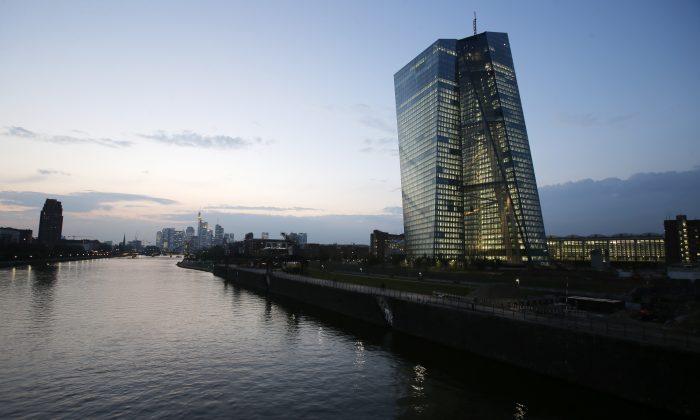 FILE - The new headquarters of the European Central Bank (ECB), building at right, under construction on the water front of the River Main in Frankfurt, Germany, in this Sept. 24,2014 file photo. The European Central Bank said Sunday Oct. 26, 2014 that 13 of Europe's 130 biggest banks have flunked an in-depth review of their finances and must increase their capital buffers against losses by 10 billion euros ($12.5 billion). (AP Photo/Michael Probst, File)
Business

FRANKFURT, Germany—The European Central Bank says 13 of Europe’s 130 biggest banks have flunked an in-depth review of their finances and need an extra 10 billion euros ($12.5 billion) to cushion themselves against any future crises.

ECB officials said Sunday the test had been tougher than similar reviews in 2011 and 2010, which gave a pass to banks that later needed bailouts.

They argued the review ensures banks, some of which have been reluctant to offer credit because they were nursing bad investments, will be ready to lend when the European economy finally picks up, removing an obstacle to recovery.

Yet after months of talk about banks that were “zombies” — walking dead, too weak to lend — it appeared unlikely that any would be put out of business by the test.

Most of those that flunked either have only small shortfalls to make up, or can point to ongoing restructuring plans as sufficient to bring them across the finish line.

The ECB said 25 banks in all were found to need stronger buffers. Of those, 12 had already made up their shortfall during the months in which the ECB was carrying out its review. They found money by issuing new shares, or by shedding risky investments or loan businesses. The remaining 13 now have two weeks to tell the ECB how they plan to increase their capital buffers up to nine months to actually carry out the plan.

The ECB checked the worth of banks’ holdings and subjected the banks to a stress test that simulates how their finances would fare in an economic downturn.

The exercise is aimed at strengthening the banking system so lenders can provide more credit to companies, boosting business activity and, hopefully, jobs. The economy has been plagued both by banks’ unwillingness to lend at affordable rates and by weak demand from companies that see no reason to risk borrowing.

ECB Vice President Vitor Constancio said the stress test and review were “quite strict” and that “the results guarantee that going forward the economic recovery will not be hampered by credit supply restrictions.”

The 13 banks that fell short were:

The bank with the biggest shortfall was Italy’s Monte dei Paschi di Siena, which was found to need another 2.11 billion euros.

Five of the banks — Eurobank, National Bank of Greece, Nova Ljubljanska Banka, Nova Kreditna Banka, and Dexia — will be able to make up for their capital shortfall by sticking to their current restructuring plans.

Most of the other banks that failed were short amounts less than 1 billion euros and in several cases less than 200 million euros. They can find the money by issuing shares, selling holdings, or holding back any profits instead of paying them out as dividends.

The bank review and stress tests pave the way for the ECB to take over on Nov. 4 as the Europe’s central banking supervisor. The test is supposed to make sure hidden troubles in the system are fixed before landing in the ECB’s lap.

The ECB’s new role is aimed at strengthening the euro currency union in the wake of its crisis over government debt. It would do that by toughening oversight of banks and keeping their troubles from turning into huge losses for national governments through bailouts. The ECB is taking over as supervisor for the biggest banks from national supervisors, who were considered to take it too easy on their home banks and not step in to ward off problems. National supervisors will still look after smaller banks.

Banks are key to the functioning of the European economy because they are where most firms — especially small and medium-sized ones — go for the credit they need to operate and expand. In the United States, companies turn more often to financial markets by selling bonds to raise money.

The 18 countries that use the euro currency showed no growth at all in the second quarter, after four quarters of weak recovery from a crisis over too much government debt.