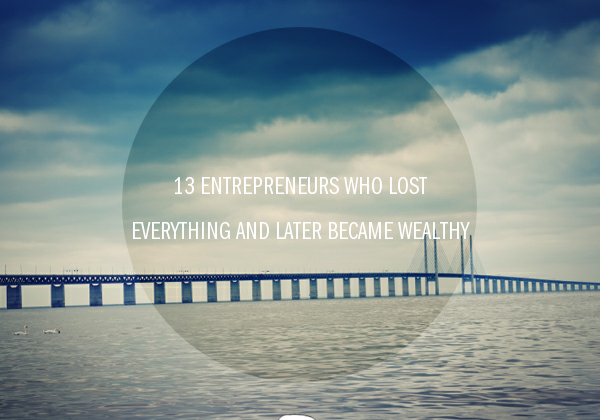 13 Entrepreneurs Who Lost Everything and Later Became Wealthy

It is rare to find an entrepreneur who achieves wild success on the first venture. In fact, numerous businessmen and women who are successful today may have failed in the past on multiple occasions.

Additionally, some of the greatest entrepreneurs and thought leaders of our time never had great educations or even graduated high school (Walt Disney dropped out in 9th grade).

Of course, this is not to say that failure should be the goal; but instead, if it occurs, it may be viewed as a simple obstacle on the way towards success. Truly, these 13 individuals are proof that it is possible to lose everything, and bounce back to make millions in the future.

Perhaps one of the greatest symbols of American success is Henry Ford, the legendary business magnate who is credited with introducing the first automobile, as well as the system of mass-production. Before the Ford Motor Company, however, he created the Detroit Automobile Company, a lesser-known precursor. Unfortunately, the cars were lower quality than Ford wanted, and the company ultimately went bankrupt.

Widely known as one of the most successful entrepreneurs in the world, Donald Trump once faced massive debt. During his years as a business manager, he has faced hundreds of millions in personal debt, as well as billions in debt taken out for his companies. Now, his worth is estimated at around $4 billion.

Larry Ellison, billionaire founder of Oracle, was not always so lucky. In fact, according to reports, he was once forced to mortgage his own house to obtain a line of credit. Oracle has flourished since then, with net assets of nearly $100 billion.

Most know Walt Disney as the creator of loveable cartoons that span across generations. Few, however, would recognize him in his early 20s, when his first cartoon studio went bankrupt, leaving him with virtually nothing.

The late Colonel Sanders is internationally renowned for his successful restaurant chain, Kentucky Fried Chicken. At the age of 65, however, he was broke, living in his car and selling his recipe for a miniscule commission.

In the late 1990s, Mark Cuban, along with his partner, sold their business to Yahoo! for over $5 billion. He wasn’t always successful, though; he was terminated from numerous positions, including as a software salesman and a waiter.

Although not generally considered an entrepreneur, J.K. Rowling has used the success of the Harry Potter series to branch out into other mediums. Before this, though, she was living on welfare, raising children, and facing rejection from numerous publishers.

In hopes of opening a parcel service that would deliver overnight packages, this entrepreneur founded FedEx, one of the most widely-used delivery services in the world. FedEx’s history wasn’t without obstacles, however; at one point the company only held $5,000, requiring Smith to use personal money to fund the business.

Steve Jobs, the late Apple co-founder, was known for his eccentricity, entrepreneurial spirit, and miraculous success. And of course, this often overshadows his earlier failures, which at one point led to his termination from Apple, the company he helped start.

R.H. Macy’s persistence led to the creation of Macy’s, the ubiquitous American retail store. In his earlier years, though, he opened four other stores in Massachusetts, all of which failed within a short period of time.

As one of the U.K.’s richest men and the founder of Virgin Group, Richard Branson commands billions of dollars in wealth. He wasn’t always so successful, though; multiple ventures, including Virgin Cola, Virgin Vodka, and others, failed shortly after their creation, costing him large chunks of his fortune.

Vacuum pioneer Sir James Dyson is a story of true perseverance in the business world. He spent through 5,000 different prototypes and all of his savings over a period of 15 years before finding the right fit. Now, his net worth is estimated to be over $4 billion.

What can we learn from these failure-to-success stories? Ultimately, failure should not be feared; in fact, for many it may have been necessary to achieve the incredible success they enjoy today.