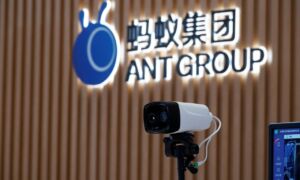 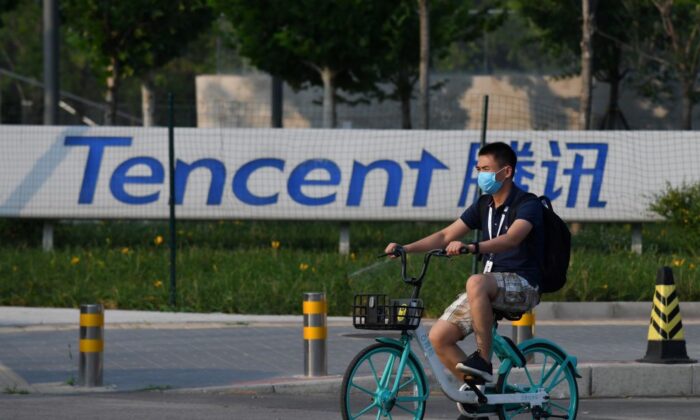 A man cycles past a Tencent sign, the parent company of Chinese social media giant WeChat, outside the Tencent headquarters in Beijing on Aug. 7, 2020. (Greg Baker/AFP via Getty Images)
China Business & Economy

Among other issues, supervision of the shareholding structure and capital was reportedly emphasized in the interviews.

1. All financial activities must be supervised;

2.  Payments should be done in their “original form,” while “inappropriate connections” between payment tools and other financial products should be severed, non-bank accounts should be strictly controlled and prevented from expanding to the public sector;

3. Monopoly of information on financial platforms should be ended;

6.  Regulate the issuance and trading of asset securitization products and overseas listing;

According to the Wall Street Journal, growing unease in Beijing over Ant’s complex ownership structure was another reason why the CCP blocked Ant Group’s IPO.

The Wall Street Journal report said a previously unreported central-government investigation found that Boyu Capital, which is effectively controlled by Jiang Zhicheng, the grandson of Jiang Zemin, holds a stake in Ant in a roundabout way through a private equity fund, Beijing Jingguan; while Li Botan, the son-in-law of former Politburo Standing Committee member Jia Qinglin, who has close ties to Jiang, holds a stake in Ant through Beijing Zhaode Investment Group.

The report mentioned that many of Jiang’s men have been purged in Xi Jinping’s corruption crackdown, but Jiang still has a certain degree of influence behind the scenes.

Hsieh Chin-ho, chairman of Investment Media and Wealth Magazine in Taiwan, said to Voice of America, “The market value of Ant’s IPO could rise to more than $400 billion, but what if Ant has hidden anti-Xi shareholders?”

He also believed this could be one of the reasons why Ant Group’s IPO was blocked.

As early as 2014, the Chinese edition of The Epoch Times exclusively broke the story that after Zhou Yongkang, former  Secretary of the CCP’s Central Political and Legal Affairs Commission and important member of the Jiang faction, inspected Tencent’s data platform in 2011, Jiang’s niece Jiang Jin was appointed as the person in charge of the government affairs of Tencent QQ.

Under Jiang Jin leadership, Tencent began deep cooperation with the CCP’s Ministry of National Security and Ministry of Public Security.

Immediately after Ant Group was interviewed for the third time, on April 13, Zhejiang Province, where Ant Group is headquartered, held a special meeting on the Internet platform at which local officials stressed the need to further study and implement the spirit of Xi Jinping’s speech at the ninth meeting of the Central Finance Commission.

When the 13 companies were later interviewed, the financial regulators emphasized the same requirement.

Among the interviewed companies, some are regarded as having a Jiang faction background, such as Tencent and Meituan Financial, in which Tencent has a stake.

Ren Chongdao, a researcher at think tank Tianjun Politics and Economy, told The Epoch Times that the CCP power struggle is behind the interviewing of the 13 companies and Ant Group. Once Internet financial platforms become big enough, they can greatly influence the flow of capital and market confidence, and control the consumer data. If the authorities cannot control these financial platforms, the consequences could be disastrous.

Ren used the turbulence of the Chinese stock market in 2015 as an example. A third of the value of A-shares on the Shanghai Stock Exchange was lost in one month during that year’s market turmoil.

He said many people believed that the market crash was a result of “collusion” between anti-Xi forces within the CCP and foreign capital. That’s why the authorities now feel they must guard against similar risks and know who exactly is behind those big financial platforms.

“By controlling the information and data, the authorities not only can monitor the people, but also can control the big data of people’s life and consumption. That’s why the authorities much take tight control over these platforms,” Ren said.