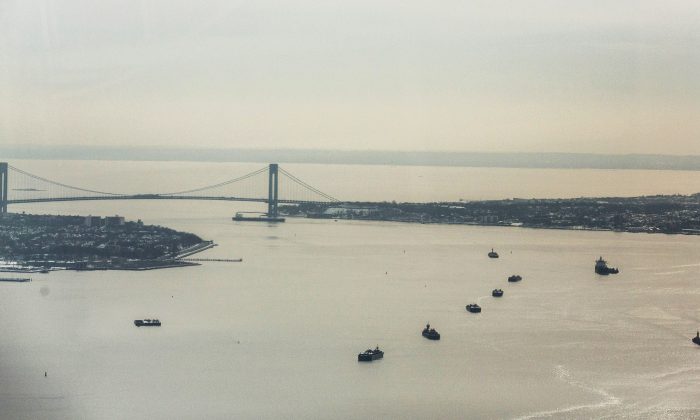 NEW YORK—Some New York City elected officials and environmentalists rallied on Monday against a plan to build a liquid natural gas terminal near New York Harbor and called on Gov. Andrew Cuomo to veto the proposal they deemed an environmental danger.

But activists from both states, as well as some lawmakers, including State Senate Majority Leader Dean Skelos (R-Long Island), have voiced concerns about the plan. Several rallied at City Hall on Monday and asked Cuomo to put a stop to the massive project.

“Our message is plain and simple: you have an opportunity to get this right,” said City Council member Donovan Richards, the chairman of the Committee on Environmental Protection. “We have a chance to divorce fossil fuels and remarry renewable energy.”

Several activists at the rally said that the terminal could be a terrorist target and any accident at the facility would pollute the Atlantic Ocean’s waters.

Some noted that the New York City neighborhood closest to the proposed terminal, the coastal Rockaways, is still struggling to recover from the damage inflicted by Superstorm Sandy in 2012.

“How in good conscience can we build a facility that will poison our waters and potentially harm our people when the Rockaways still need so much?” asked Comptroller Scott Stringer.

Other activists said the terminal is a dangerous, unnecessary project, given that America is awash in large supplies of domestically produced natural gas, much of which is produced in the Marcellus Shale formation along the Appalachian Mountains.

That gas is extracted by a process called fracking, which Cuomo banned in New York late last year.

He has not weighed in on the gas terminal. A spokesman for the governor did not immediately respond to a request for comment.

Officials at Liberty Natural Gas have disputed environmental concerns and have pitched the $600 million privately funded project as a safe, cleaner alternative to fracking. Many business and labor groups support the plan, which was first proposed in 2008 and is projected to generate 800 construction jobs.

New Jersey Gov. Chris Christie vetoed an earlier iteration of the project, which previously had proposed to run pipes through the Garden State’s waters. He has not commented on the new plan.

The project is under review by the U.S. Coast Guard and the U.S. Maritime Administration, which have already issued a draft environmental impact statement finding that the project would not cause major safety or environmental problems.