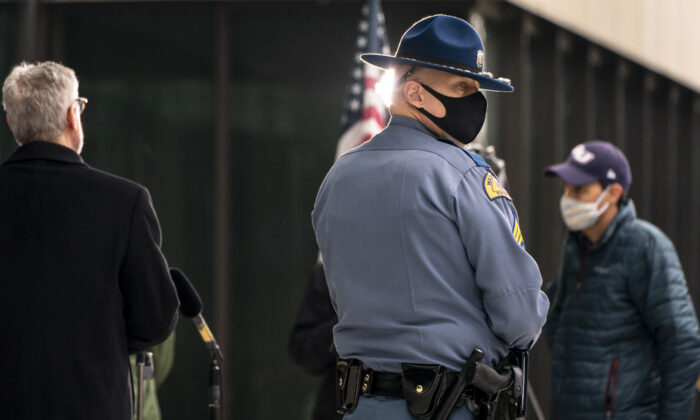 Over 100 workers were terminated because they didn’t comply with a COVID-19 vaccine mandate, the Washington State Patrol announced Tuesday.

The 127 workers include 53 civil servants and 67 troopers.

The workers failed to provide proof that they had received a COVID-19 vaccine or an exemption for religious or medical reasons.

“We will miss every one of them,” Washington State Patrol Chief John Batiste said in a statement.

“I extend a hardy thanks to those who are leaving the agency. I truly wish that you were staying with us,” he added.

The number of exceptions granted was not disclosed and the patrol did not immediately respond to a request for comment. The Washington State Patrol Troopers Association, a union that represents troopers, declined to comment.

The patrol indicated there may be a short-term impact from the losses but said it would look to shift resources where necessary to address that. It also plans on vigorously recruiting to fill three new academy classes while looking to fill vacancies on the civilian side as soon as possible.

“As for the more than 2,000 individuals who elected to stay with our agency, I am forever thankful. We have the responsibilities of the agency to carry forward and I am not going to ask you to do more with less. We shall do our very best to keep our remaining staff from becoming overburdened by these temporary losses,” Batiste said. “We must now turn our attention to making sure we deploy our resources in a manner that continues to keep our roadways safe and meets the other core law enforcement responsibilities this agency has met with honor for over 100 years.”

The mandate for most state workers, including troopers, was announced by Gov. Jay Inslee, a Democrat, in August. The mandate required workers to be fully vaccinated by Oct. 18. Fully vaccinated means a person has gotten two shots of the Pfizer or Moderna COVID-19 vaccine, or the single-shot Johnson & Johnson vaccine, and that at least two weeks have elapsed since their final shot.

“It is the mission of public servants and those providing health care to serve our fellow Washingtonians. These workers live in every community in our state, working together and with the public every day to deliver services,” Inslee said at the time. “We have a duty to protect them from the virus, they have the right to be protected, and the communities they serve and live in deserve protection as well.”

Inslee said last week that over 91 percent of state employees had been fully vaccinated against the CCP (Chinese Communist Party) virus, which causes COVID-19. Approximately 800,000 workers are covered by the mandate.

The mandate has drawn some pushback, including from the top Republicans in the state legislature.

“We are already experiencing higher prices and empty shelves partially as a result of COVID’s shutdowns and workforce shortages,” Senate Republican Leader John Braun and House Republican Leader J.T. Wilcox said in a joint statement. “Today’s deadline, with its unnecessarily hardline consequences, will only make that worse when hundreds, if not thousands, lose their jobs and are denied unemployment benefits. It also threatens public safety by reducing our police forces at a time when crime is already rising.”

Other departments have yet to report how many workers were fired, though some have started or are preparing to operate at reduced staffing levels. Washington State Ferries, for instance, began a reduced schedule over the weekend because of a lack of enough workers for normal operations.