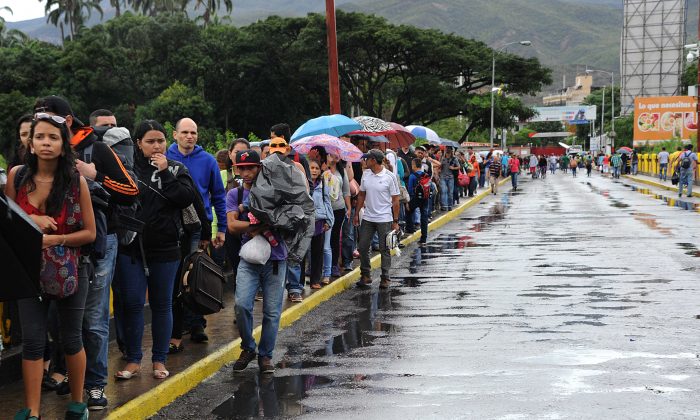 Venezuelans cross the Simon Bolivar bridge linking San Antonio del Tachira, in Venezuela with Cucuta, Colombia, to buy basic supplies on July 16, 2016. Thousands of Venezuelans crossed into the Colombian city of Cucuta to buy food and medicine, taking advantage of another brief opening in the border that's been closed nearly a year. Caracas authorized the temporary opening a week after some 35,000 Venezuelans poured across the border during a 12-hour opening of the pedestrian bridge. (George Castellanos/AFP/Getty Images)
Americas

123,000 Venezuelans Cross Into Colombia to Hunt for Food and Medicine

SAN ANTONIO DEL TACHIRA, Venezuela  — More than 100,000 Venezuelans, some of whom drove through the night in caravans, crossed into Colombia over the weekend to hunt for food and medicine that are in short supply at home.

It was the second weekend in a row that Venezuela’s socialist government opened the long-closed border with Colombia, and by 6 a.m. Sunday, a line of would-be shoppers snaked through the entire town of San Antonio del Tachira. Some had traveled in chartered buses from cities 10 hours away.

Venezuela’s government closed all crossings a year ago to crack down on smuggling along the 1,378-mile (2,219 kilometer) border. It complained that speculators were causing shortages by buying up subsidized food and gasoline in Venezuela and taking them to Colombia, where they could be sold for far higher prices.

But shortages have continued to mount in Venezuela amid triple-digit inflation, currency controls that have restricted imports and investment and the world oil price slump that caused a collapse in the oil revenues that fund government spending.

Although the border was heavily patrolled by Venezuelan troops, the crowds were mostly orderly amid an atmosphere of tense excitement. A few activists handed out anti-government pamphlets, looking to galvanize the frustration that has characterized food riots and long lines outside supermarkets in recent weeks.

Some of those waiting to cross made anti-government chants and sang the national anthem, but there was no appetite for confrontation. They were focused on the prospect of getting at fully stocked supermarket shelves and the opportunity to buy even non-essential indulgences like nail polish and beer before the re-closing of border crossings Sunday night.

“It’s kind of crazy day,” said Alejandro Chacon, who owns a hardware store in the nearby town of San Cristobal and was crossing the border for the first time since the closure. “It’s strange to see this, but we know we’re going to find what we want in Colombia, so it’s a nice difference.”

Colombian officials dressed in white shirts individually welcomed those arriving while police handed out cake and blasted out festive vallenato tunes, the traditional music beloved on both sides of the border. Roadside kiosks set up by entrepreneurs took payment in Venezuela’s currency for goods at a steep discount from what they cost on the black market back home.

“It’s sad to be doing this, but we also know over there we’ll find something,” said Rosa Cardenas, a 70-year-old retired school teacher accompanied by a 5-month-old granddaughter.

Colombian officials estimated 35,000 Venezuelans crossed the border Saturday, the first day of whatColombia’s government called a humanitarian corridor. An additional 88,000 entered Sunday, authorities said as the mad rush on products like sugar and flour led to extra supplies of staple goods being sent from other Colombian cities.

Venezuelan President Nicolas Maduro has sought to deflate talk of a humanitarian crisis and instead blames his government’s political enemies and self-serving smugglers for shortages. He dismissed as a “media show” the jarring images a few weeks ago of 500 women pushing through the border checkpoint, saying they were desperate to buy food.

On Sunday, Venezuela’s state TV ran footage of Venezuelans returning from Colombia empty-handed, dissuaded by what they called “price-gouging” and the threat of violence by their neighbors.