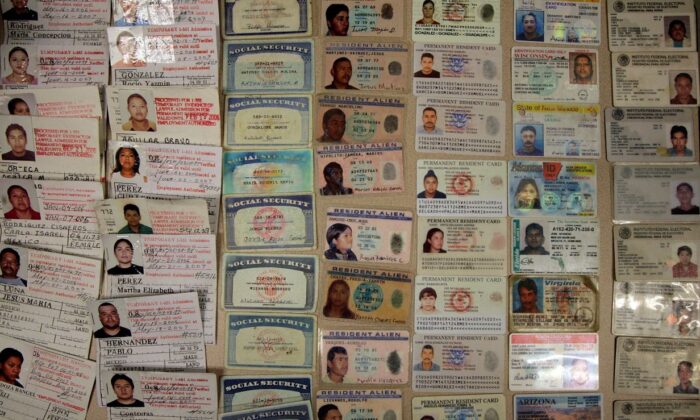 The Customs and Border Protection (CBP) seized more than 1,000 counterfeit driver’s licenses in Indianapolis, Indiana, that were smuggled from Hong Kong.

“Last week Indianapolis CBP detained three shipments that were arriving from Hong Kong,” CBP announced on Friday. “The first shipment was heading to an address in Chicago and the other two shipments were heading to addresses in New York.”

According to the federal agency, the containers were falsely labeled “Game Card” and had a value of $20. But when officers investigated, they discovered some 1,200 counterfeit state driver’s licenses, including a shipment heading to Chicago, while two others were being sent to addresses in New York.

The falsified licenses were from 20 states including California, Michigan, Illinois, New Jersey, South Carolina, Ohio, Pennsylvania, Texas, and more, CBP said. Some licenses had the same picture but had a different name.

“Counterfeit drivers licenses have historically been used by those under 21 years of age for the illegal consumption of alcohol, but fake IDs have also been used in criminal enterprises, such as identity theft cases and immigration fraud,” Chief CBP Officer Tim Hubbard said in a news release. “Customs and Border Protection officers will continue to be vigilance during enforcement operations, and we remain committed to the safety and security of our nation.”

Another CBP official, LaFonda D. Sutton-Burke, said that the fake licenses related to “identity theft, worksite enforcement, critical infrastructure protection, fraud linked to immigration-related crimes such as human smuggling and human trafficking, and these documents can be used by those individuals associated with terrorism to minimize scrutiny from travel screening measures.”

Earlier in January, officials with the CBP office in Cincinnati, Ohio, discovered thousands of fake identifications from being shipped out of the United States, finding more than 2,000 international driver’s licenses and paired booklets.

“These counterfeit documents can lead to disastrous consequences,” said Sutton-Burke. “Criminal organizations use these counterfeits to avoid attracting attention to their illegal activities.”

In August 2020, meanwhile, authorities seized some 20,000 fake driver’s licenses that came from China, Hong Kong, and other countries.

“Take a look at these IDs—same person, different bio info,” the CBP Chicago wrote on Twitter at the time. “Officers in Chicago have kept a tally of how many fraudulent IDs have come through the O’Hare mail facility. From Jan. 1 to June 30, CBP officers have seized nearly 20,000 counterfeit driver’s licenses.”