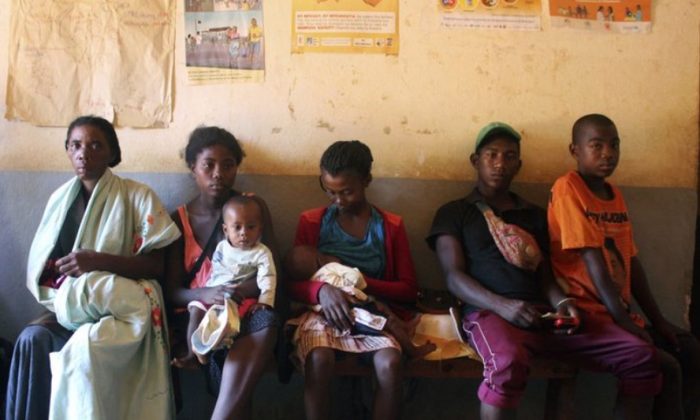 In this photo taken Thursday, March 21, 2019, mothers wait to have their babies vaccinated against measles, at a healthcare center in Larintsena, Madagascar (AP Photo/Laetitia Bezain)
Africa

A measles epidemic has reportedly killed more than 1,200 people in Madagascar with more than 115,000 cases.

The World Health Organization (WHO) said that those killed from the outbreak have been mostly children under the age of 15.

The Associated Press reported that about 58 percent of people on the main island have been vaccinated.

The outbreak, which started in September, has worsened due to malnourishment, AP reported, adding that about 50 percent of children in Madagascar don’t get enough nutrition due to economic reasons. It’s one of the main reasons for the epidemic, the report noted.

In a country like Madagascar, where they are battling a deadly outbreak and vaccines are in short supply, the US and European anti-vax movement infuriates physicians.

“The epidemic unfortunately continues to expand in size, though at a slower pace than a month ago,” Dr. Dossou Vincent Sodjinou, a WHO epidemiologist in Madagascar, told the news outlet.

Health officials say that many people don’t have access to vaccines, either because there aren’t enough or families are too poor, Reuters reported last month.

However, “Malnutrition is the bed of measles, ” Sodjinou added in the AP report. Madagascar is among the poorest countries in the world.

“Immunization is not the only strategy for the response to this epidemic. We still need resources for care, monitoring and social mobilization,” he added.

“I could not afford to take him to the hospital,” Dada, a local, told Reuters about his son.

“It’s my 6-year-old daughter who had measles first. She had a lot of fever,” another woman added. “I called the doctor but it was Friday. He had already gone to town. I went to see another doctor who told me that my daughter had an allergy. … This misdiagnosis was almost fatal.”

Her child narrowly survived the ordeal after days of vomiting and diarrhea.

“I had five children. They all had measles. For the last, I did not go to see the doctor because I did not have money,” Lalatiana Ravonjisoa, another woman, said. “I gave my baby the leftover medications from his big brother to bring down the fever.”

According to ReliefWeb, “measles is an acute, highly contagious viral disease that has potential to lead to major epidemics … The malnutrition rate is also a contributor as malnutrition increases children’s vulnerability of serious complications and death from measles infection.”

The risk of the outbreak, according to the website, is “very high” in the East African nation.

The U.S. Centers for Disease Control and Prevention (CDC) recently issued an update on the number of measles cases in the United States.

The agency reported 387 cases across the country from Jan. 1 to late March.

States that have reported cases of the virus are Washington, Texas, Oregon, New York, New Jersey, New Hampshire, Missouri, Arizona, California, Colorado, Georgia, Illinois, Kentucky, Michigan, and Connecticut, according to the agency in a bulletin on March 28.

In recent years, the most outbreaks in a single year occurred in 2014 when 667 cases of measles were confirmed, the agency said.

“These outbreaks are linked to travelers who brought measles back from other countries such as Israel, Ukraine, and the Philippines, where large measles outbreaks are occurring,” the health agency said, adding, “Measles is still common in many parts of the world including some countries in Europe, Asia, the Pacific, and Africa.”

The CDC noted that the virus can also spread in areas of the United States where groups of people are not vaccinated.

Meanwhile, the CDC defines an “outbreak” as three or more cases in an area.