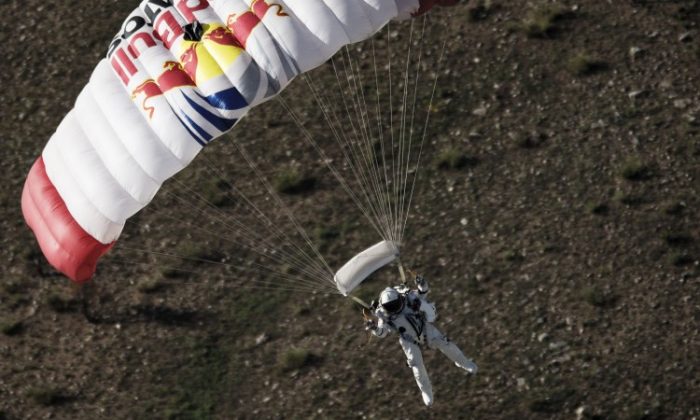 Pilot Felix Baumgartner of Austria lands in the desert during the second manned test flight for Red Bull Stratos in Roswell, New Mexico, USA on July 25, 2012. Baumgartner called off his most recent skydive due to unpredictable winds. (Joerg Mitter/Red Bull via Getty Images)
US

Felix Baumgartner, the Austrian daredevil, who was to skydive out of a balloon 23 miles above New Mexico, called off the event due to winds.

Red Bull, the energy drink company sponsoring the dive, made the announcement that Baumgartner’s 120,000-foot free fall will have to wait for another day, according to its website. It did not give a specific date when that would be.

“Red Bull Stratos’ daring mission to the edge of space, which has been five years in the making, has been made to wait a little longer after high winds forced the mission to be aborted on Tuesday,” it said.

The winds would have possibly damaged the ultra-thin balloon that would carry Baumgartner, a former Austrian paratrooper, into the stratosphere.

Via the Red Bull Stratos Twitter account, it said that Wednesday’s conditions would also not be suitable for the death-defying launch.

Baumgartner, whose quest has been delayed numerous times, said earlier on Tuesday, “It’s all about what we do now and accomplish now. We’ve made it so far, there’s no way [we’re] turning back,” according to the Twitter account, suggesting that he’ll carry it out in the coming days if weather permits.

Baumgartner has already made successful dives of 15 miles and 18 miles to prepare for the coming jump.

Felix Baumgartner, the Austrian daredevil, who was to skydive out of a balloon 23 miles above New Mexico, called off the event due to winds.