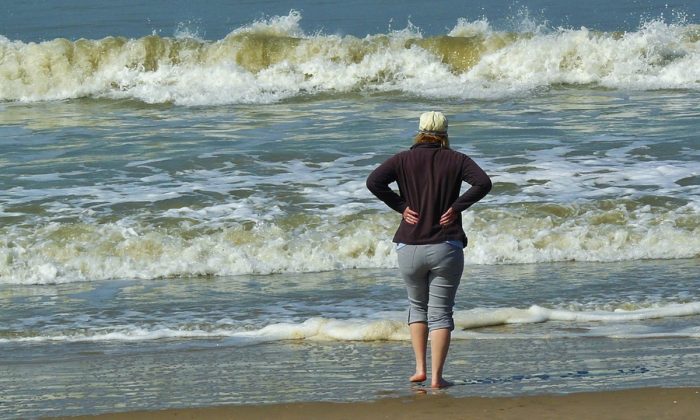 A 12-year-old Indiana girl is now walking again after battling flesh-eating bacteria that she reportedly caught while vacationing on a Florida beach.

She was skateboarding and received a scrape on her toe, and doctors told the news outlet she contracted the bacteria when it entered the cut after she went in the water.

Her leg swelled to an abnormal size, rendering her unable to walk. She also had a fever of 104.5 degrees Fahrenheit.

Kylei’s mother, Michelle Brown, told Inside Edition that “we weren’t expecting her to be able to walk for a few more months … we haven’t even started therapy yet.”

According to CBS News, officials said that it would take the girl months to recover from the bacterial infection.

Brown said that after the girl went into the water at a beach in Destin, Florida, she suffered pain in her right calf the following day.

The pain only got worse and prevented her from walking, she told CBS.

“At that point, I had to put her on my back and carry her around,” Brown said.

They later diagnosed her with necrotizing fasciitis.

Brown posted a warning message on Facebook, saying, “I have spent the past few days seeing numerous friends and family at the beach enjoying their family vacations, and I can’t help but feel sick to my stomach and fear for those I know.”

“The storms from the days prior had stirred up the ocean and it wasn’t as clear as it normally is. The water looked murky. We were only allowed in the water to our ankles because the waves were huge and the undertow was too dangerous,” she wrote.

Brown then called on others to be aware of the bacteria and its symptoms.

“It can be contracted by a scrape, wound, new tattoo, or even through a bruised area of skin. After researching more, 1 out of 3 people who contract Necrotizing Fasciitis die from it, as well as septic shock making that fatality rate even more relevant. I whole heartedly believe she contracted the bacteria through a scrape on her big toe (foot on same leg), while we visited Pompano Beach in Destin, Florida,” she wrote.

A 45-year-old Florida woman said she developed necrotizing fasciitis after visiting Siesta Key Beach in May, reported the Herald Tribune.

“I started getting really sick after I went to the beach. I had a scratch on my leg, and I didn’t think anything of it,” Amy Barnes told the news outlet. “Then it ate up the whole back of my leg.”

The woman said she went to Sarasota Memorial Hospital and received a diagnosis of necrotizing fasciitis.

“It was just a little scratch, I never in a million years thought it was going to turn into something that big, oh my gosh,” Barnes told an ABC affiliate in Florida. “Not less, something that was going to cover my whole leg and keep me from walking. I was in a wheelchair too.”

Tyler King, a Florida man, recently said he contracted a form of flesh-eating bacteria, but he didn’t get it from the beach.

King said that his left bicep began to swell, CBS News reported. He then took Benadryl but his arm tripled in size.