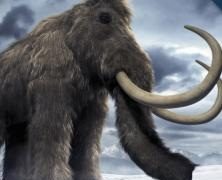 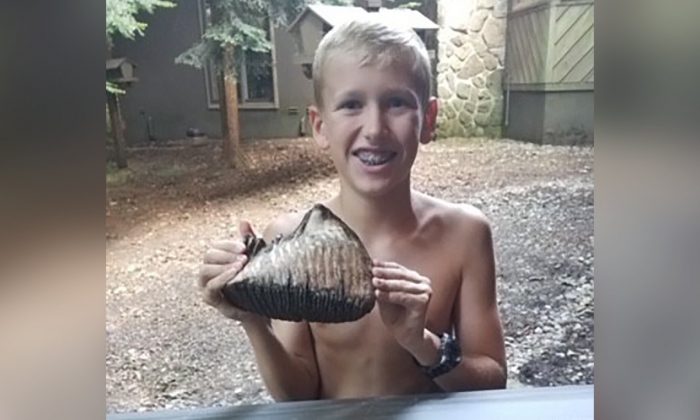 Jackson Hepner holds his discovery in Millersburg, Ohio. (Courtesy The Inn at Honey Run)
US News

A 12-year-old boy at a family get-together discovered a rare tooth from a woolly mammoth, an extinct giant relative of the Asian elephant that was last seen on earth 4,000 years ago.

Jackson Hepner, 12, made the discovery at the water’s edge among the hills of Ohio’s Amish Country during a weekend family reunion at the Inn at Honey Run in July, said a post at the Inn’s blog.

“One Saturday this past July, Innkeeper Jason’s family took advantage of bright summer weather and gathered on the grounds of The Inn for a family reunion. Surrounded by scenic nature, it was a perfect day for mingling and laughing with loved ones.

“They had no idea the special day would become even more memorable than anticipated,” said the blog post.

The family gathered at the bridge over Honey Run Creek for pictures. During a break, Hepner wandered along the river bank and spotted something “intriguing.”

“Just along the water’s edge was a strange-looking solid object covered in ridges. He pulled the item from the mud knowing he’d discovered something remarkable–some sort of tooth,” said the blog post.

Hepner wrote an account of the discovery made on that day with a pencil in his notebook.

“I found the mammoth tooth about ten yards upstream from the bridge we had our family pictures on. It was partially buried on the left side of the creek. It was completely out of the water on the creek bed,” Hepner wrote in a note that’s shared on the blog, as well as on the Inn’s Facebook page.

Within the next few days, scholars and professors including Dale Gnidovec of The Ohio State University’s Orton Geological Museum, Nigel Brush of Ashland University’s Geology Department, and P. Nick Kardulias College of Wooster’ Program of Archeology identified it as a tooth belonging to a Woolly Mammoth, “specifically an upper 3rd molar.”

“Teeth of Woolly Mammoths are distinguished by parallel ridges, which the animals used to grind grass and seeds,” said the blog post.

“We couldn’t be prouder to be the site of such an extraordinary find and unforgettable experience!” the Inn blog declared.

Hepner eagerly wants to show the tooth to his friends and wrote in his notebook: “I would like to have my tooth back in my hands as soon as possible. I want to show my friends.”

Who Were Woolly Mammoths?

Woolly mammoths are giant extinct relatives of modern-day elephants and they lived during the ice age, according to a paper from Michigan State University (pdf).

“These herbivores, known for their long, curved tusks and thick fur, were comparable in size to modern African Elephants; They stood about three meters tall and weighed up to 6 tons. The last known group of mammoths went extinct just 4,000 years ago,” explained the Inn’s blog post.

Woolly Mammoth fossils are frequently discovered in the midwestern U.S. and it’s the teeth which are most often discovered, according to the Illinois State Museum.

“The teeth of mammoths are quite distinctive. They are composed of a set of compressed enamel plates that are held together with cementum. These cemented plates make a very tall, strong, and wear-resistant tooth. After a tooth erupts from the gum cavity, the mammoth uses it in grinding coarse vegetation like grass. This use causes the tooth to develop a flat top with low enamel ridges where the plates have been worn,” explained the Illinois State Museum on its website.

A mass grave of Woolly Mammoths was discovered in Hot Springs, South Dakota, in 1974.

The Dakota site is now the largest existing repository of Woolly Mammoths in North America with 60 complete mammoth skeletons, according to Earth Watch Institute.